Archaeological site of the Sanctuary of Hercules Curino

Archaeological site of the Sanctuary of Hercules Curino 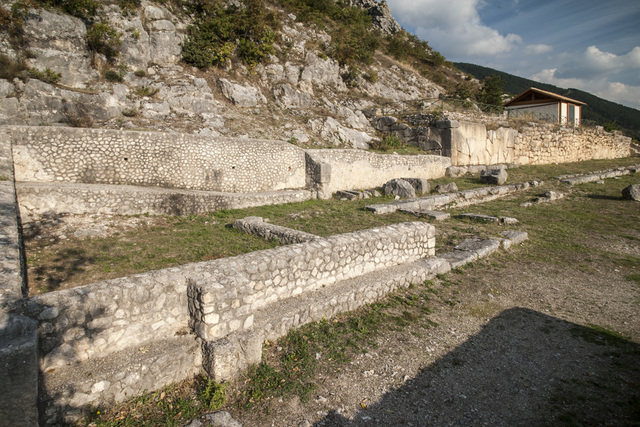 
The sanctuary dedicated to Hercules Curino lies at the foot of Mount Morrone, in the area which according to local tradition has always been associated with the memory of the Latin poet Ovid. Ovid was born in Sulmona in 43 BC and died in exile in Tomis, on the Black Sea, in 17 AD.

Until 1957, when a massive campaign of excavations was begun, it was thought that the ancient architectural remains protruding from the ground, near the village called Fonte d’Amore belonged to Ovid’s Villa. The structures that archaeologists unearthed during the following decade, however, indicated that it was not a house, but a much larger building and referred to an important place of worship built on artificial terraces and frequented by local people from the 4th century BC to the 2nd century A.D.

The origin of the cult of Hercules is perhaps related to the existence of springs and pools of water, caves and natural ravines, where the union of the two great elements - land and water - suggested the presence of the supernatural and the divine. Here in the 4th century BC, local people built the temple and dedicated it to the hero - a figure particularly linked to the world of pastoralism and whose cult was therefore especially prevalent near the ancient sheep tracks. The church was later expanded (between the 3rd and 2nd centuries BC) and finally completely transformed during the 1st century BC, when the cultural and economic growth of ancient Sulmo, allowed the adaptation of Hellenistic building taxes, also seen in sanctuaries in Lazio of the same period. In the second half of the 2nd century AD a strong earthquake caused a landslide that probably caused the collapse of the structures and filled the area with debris. Nevertheless the site continued to be popular, albeit sporadically, at least until the 3rd or 4th century AD. The continuing sanctity of the place is confirmed in the Middle Ages through the ascetic figure of Celestine V who, in the same area, founded the Abbey of Santo Spirito al Morrone and the hermitage of Sant 'Onofrio.

The structure is organised on two levels of artificial terraces. The lower one is made up of an imposing wall of concrete substructure made from opus incertum and opus quasi reticulatum brickwork. Above it, in line with the first square were fourteen vaulted spaces, looking out onto the large panorama of the Peligna valley which were probably used as utility rooms with the first and last, occupied by the access ramps to the second terrace. The latter, of full width, was partially covered by a long colonnade and the main entrance to the temple, and from which two large orthogonal staircases led up to the sacred buildings. Between the two staircases was a paved area. On the upper tier was a small donarium and a monolithic stone fountain. It was here that the faithful stopped to make a donation and were purified with water before entering the sacred area. The shrine, actually located in a higher position, was placed on a high podium at the end of the ascent which was punctuated with ritual stages. On site there are still traces of the wall decorations with marble effect paintings - similar to the first Pompeian style - and a fine polychrome mosaic floor. The latter is structured in concentric bands from a central rosette, with decorative motifs drawn from the Hellenistic repertoire including plants, darting dolphins, recurring waves interrupted by palms, towers and scales. At the entrance there is a bolt of lightning which is an obvious reference to Zeus, father of Hercules. The wall paintings and mosaic floor were made at the time of the expansion of the sanctuary in the 1st century BC An almost intact altar covered with bronze plates - unique of its kind - was found at the entrance. The inscription on the front tells us that it was the votive offering of Caius Septimus Popiliano, evocatus of Augustus - formerly a praetorian who had been promoted. Other findings relate to votive offerings of various kinds, and among them of great value was the statuette of Hercules at rest. Initially thought to be a copy of a lost prototype by Lisippos, it was recently judged to be a replica by the well-known sculptor of Sicyon, to whom the ancients attributed 15,000 works. The precious statue is now kept in the National Archaeological Museum in Chieti and there is a copy in the Roman section of the Civic Museums of the SS. Annunziata in Sulmona.