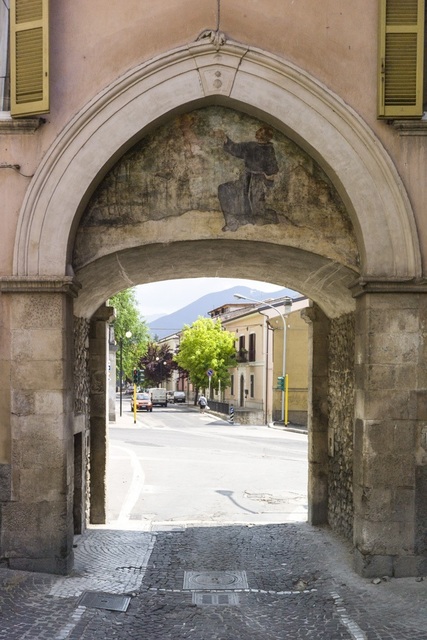 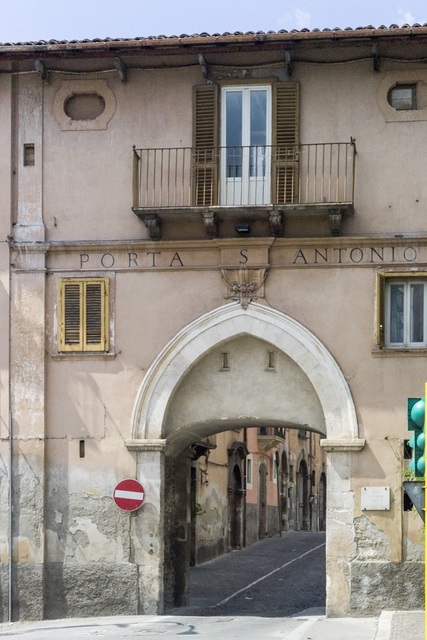 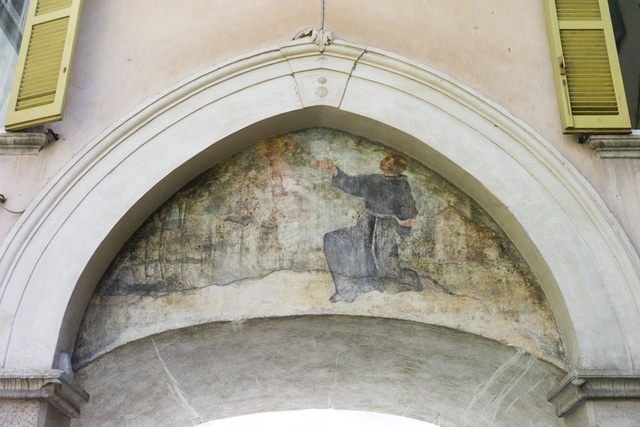 The gate opens along the western section of the second wall, which by the end of the 13th century and the beginning of the next century was extended to include within its perimeter the villages which had sprung up near the earlier circle and - specifically - the village of Sant 'Agata.

It replaced the function of Porta Filiamabili, which still exists, and which had previously closed the old centre of the first enclosure.  It inherited for a time the name of "port of the goats" - one of many that the gate took over the centuries - and, in the 17th century, it was also called gate of the Crucifix.


The top section, after falling out of use as permanent housing for the city’s Guard Corps, was in private use, perhaps in the early 18th century, initially unauthorised and then later with an annual rent to the Municipality.


According to a decurial decision from 1816,  Domenico Granata, manager of the town’s ancient paper mill, was permitted to use this portion of the gate as his home for the payment of two quires of paper and the right to affix his crest, consisting of three grenades, above the arch.  An act to remove the family crest was subsequenly issued and four years later the annual fee was extended to eight ducats. Nevertheless the crest is still in situ. The earthquake of 1706 caused the collapse of the adjacent tower and presumably also damaged the door, which was lowered at this time perhaps with the insertion of a bezel.

The pointed outside arch, from a comparative analysis with other contemporary gates, can be dated to the end of the 13th century. The structure inside - as well as the barrel vault of the passage itself - are likely instead to date back to a later restoration, as they are made of different materials and of a lesser value, such as bricks for the structure and the stucco coating which was used to simulate stone. Both arches were lowered by lunettes, but only that of the inner facade shows the remains of a fresco of St. Anthony of Padua. Any apparent misunderstanding about the identity of the Saint should not however give rise to doubts about the name of the gate. Its dedication to Sant'Antonio Abate is attested by ancient documents, such as specific paragraphs of the ritual parchment which is preserved in the Diocesan Museum of Sacred Art of Santa Chiara. The invocation within them clearly refers to Sant'Antonio Abate as the protector of the disease commonly known as "shingles". On the left wall of the passage the access door to the steps leading to the nearby guardhouse is still visible. The exterior facade of the gate is completely plastered and above the arch there is the Granata family crest crowned by a horizontal band with cornice which shows the name of the gate. A central balcony is flanked by square windows and other openings from different eras denote its later use as a residential structure.