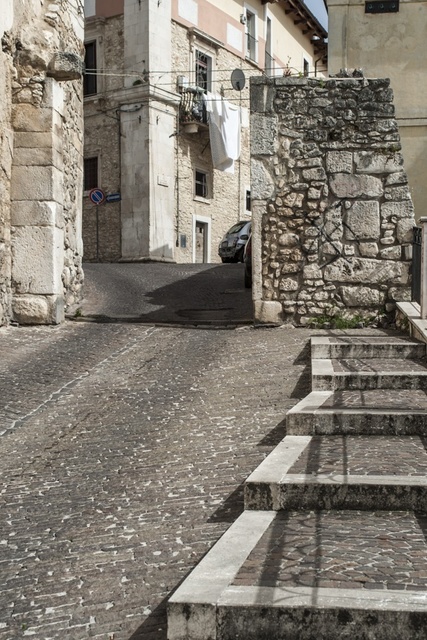 The current name of the gate derives from the Italian version of the original name Johannis Bonorum hominum, who was certainly a character who had been responsible for its restoration or who lived nearby, as has been seen several times relating to other gates.

Here an acccess way was created in the north-west of the old walls - on the opposite corner to Porta Japasseri - which also marked the entrance into the city of the Via Numicia.

Its first construction dates back to the Middle Ages, although it was probably restored in Gothic style around the 14th century. At this time the city built a second wall with new gates replacing older ones, with the exception of both Porta Bonomini and Porta Japasseri, which were located in parts of the walls which were still in use.

Located at the top of a steep slope, the gate retains only its stone piers and dates back to the last of its many reconstructions from around 1708, just after the terrible earthquake of two years previously.
Until then this entrance to the city featured a pointed arch as was common to most of the other city gates.  It was replaced with a wooden lintel which remained in place until the end of the 1980s.  On the inside left, we can still see the ring of stone in which the upper hinge of one of the two closing doors would have sat.
On the same side a private house called the Palazzo De Meis has been incorporated into the wall while on the other side there is an unknown structure perpendicular to the door itself.