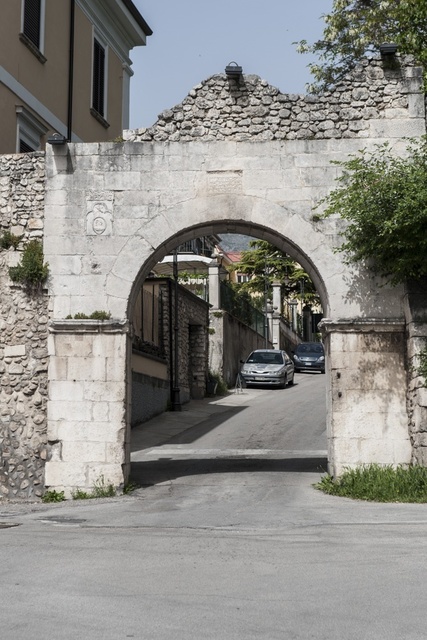 The gate was formerly known as "Pinciara", as it served the village of the same name.  It was so called because of the numerous roof tile factories which were active in the Middle Ages.  Its first mention as Porta Romana is found in the city’s land registry of 1376.


In the 16th century it took the name of Porta San Matteo, due to its proximity to the small church dedicated to the saint, that still exists today although in ruins.


The actual structure dates back to 1429, as per the inscription in Roman numerals affixed to the left of the arch, below which is a shield with the initial "M"in the centre.  This “M” may refer to the Meo mentioned in the inscription in gothic letters at the top side of the gate.


The writing reads: "This gate was made by Bubu de Meo (or Buzu) de Lucia" and therefore would seem to provide the name of either the builder or the benefactor of the reconstruction of the gate. Archival sources from the years 1389-1412 show a Butio de Lucia and, in a further document of 1445,  mention a Meo Butii de Lucia which could provide the right key to the name listed.


A subsequent confirmation would seem to come from the Land Registry of the early 16th century, which contains a "vegetable garden at the tower of a de Meo Duccio de Lucia" bordering on Via di Porta Romana, which shows how this person might have been made responsible, not only for the costs of restructuring the gate but also of the defensive tower nearby (the "torrone" mentioned in the text), so that the latter would have kept the name even at a later date.

Among the city’s gates which still stand today, this is the only one with a semi-circular arch. It opens along the western side of the 14th century defensive walls, which are preserved both above and to the sides, and also to the south, where they are connected to Porta Bonomini, one of the gates of the original walls. It consists of a round arch supported by sturdy pillars finished with a moulded frame that then wraps both inside and outside the arch and stops at the closing groove. The gate was also equipped with a second locking system, with the more traditional double doors, of which the support rings of the upper hinges are still visible. On the square blocks of stone, to the right, are the city’s coat of arms with the initials SMPE, the initials of the famous verse by Ovid "Sulmo mihi patria est". On the left there is a second coat of arms with an "M" in the centre and, above, an inscription with the date of 1429. The central inscription, in all likelihood, shows the name of the benefactor of the work.