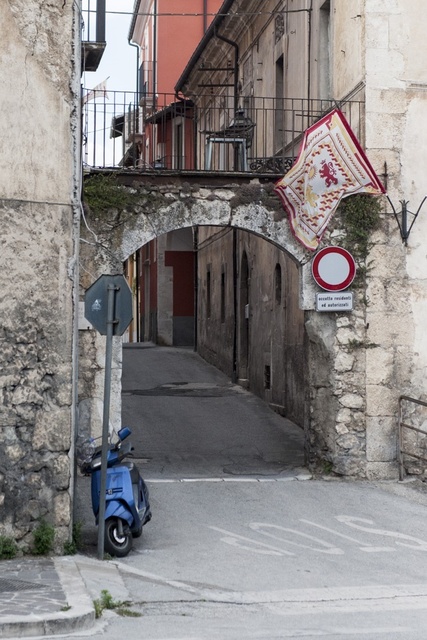 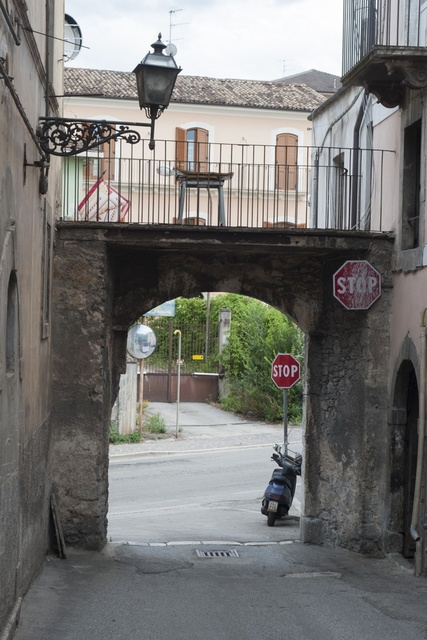 The gate opens along the eastern section of the second wall, which by the end of the 13th century and the beginning of the next century had been extended to include within its perimeter the villages which had developed near the earlier circle - specifically here, that of the Borgo Pacentrano, in whose extreme southern area this access opens.


Scholars disagree about its date. One theory accepts as plausible the date of 1755 as is shown on an emblem which is affixed above the gate.  This date suggests that it was opened after the earthquake of 1706, presumably around the middle of the century.


There is a different opinion by Hogenberg who detected, in an engraving from 1572-1618 which depicts the town of Sulmona, the existence of a smaller access that opened in Borgo Pacentrano, represented to the east of Porta Nuova - the current Porta Napoli.  This might in fact be this gate -  giving  credence to the possibility of its existence in a previous era.


From the 16th century the gate’s nickname of ‘Saccoccia is well attested, attributed to a family resident in the vicinity. There is a lack of documentation from the oldest times, but the opening of the gate should certainly be considered prior to the date engraved on the emblem.  Although it is not defined by the nickname of "Saccoccia", it is depicted in the drawing of the monastery of Santa Chiara taken from the Land Registry of the monastery, written in 1704-5 and kept in the Cathedral of St. Panfilo.

The gate consists of a segmental arch supported by two piers, all made of blocks of stone. It is likely that previously support ledges also existed. The pier to the left of the viewer shows, at about two thirds of its height from the ground, a very narrow block which could have carried out such a function. The right pier appears strongly blunt - perhaps due to the deterioration of the stone - and subsequently repaired with cement. Inside the door at the top the wooden supports of the hinges still remain and at the bottom right there is a similar stone housing. Although the construction of the gate can perhaps be placed in the 17th century, its rather modest features, date back to the 18th. This timeline is given by the crest-shaped scroll affixed to the upper right, which bears the date 1755 preceded by the name Pietro Antonio Pecorillo. This date is followed by another two dates: 1729 and 1864, which probably relate to later restoration work. At the top of the inscription a sheep is depicted. It is probably connected to the name of the character mentioned who almost certainly had an interest in the restoration of the door. In the 18th century the Saccoccia family still lived in the village. Among its members there was a Pietro Antonio Pecorillo, the owner of a tannery who had married a Saccoccia - presumably the same as is mentioned in the inscription and from the sheep relating both to his name and his profession.