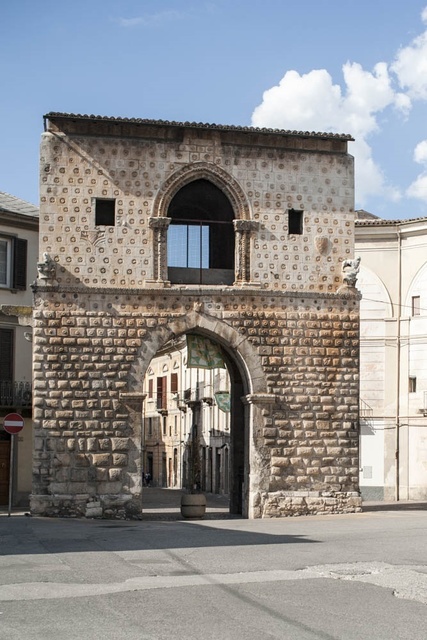 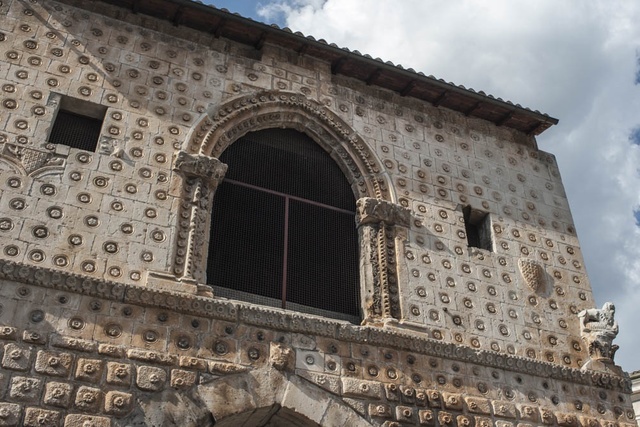 The southern gateway to the medieval town was part of the second wall, built between the late 13th and early 14th century to meet the new requirements of the town’s imposing defenses which resulted from the population growth and urban expansion that Sulmona had experienced during the period of Swabian domination in the 13th century.


Previously named "Porta Nova", perhaps because it led onto the ancient "Via Nova", and defended the south entrance of the city on the important road link with Naples, the capital of the Kingdom.

The gate is rectangular and is nowadays separate from the walls which were torn down in the 19th century to make way for the road. It’s also devoid of the original battlements and crowning. The decorative exterior features a rusticated style, near the string course, with rosettes in relief. The upper wall is smooth with rustications bearing the same motif of the rosette, this time worked in high relief. The same element is repeated in the profile of the centre window, which may have originally been mullioned, and whose brackets feature bas-relief scenes of hunting and sacrificial rites, probably from Roman times. The two capitals, placed at the ends of the middle section, with lions and leaf-like decorations, appear to come from older buildings. On either side of the window there are two openings - probably made later - and emblems with Anjou lilies. An additional emblem, which is difficult to read, is placed above the entrance arch. The upper floor was intended as accommodation for the guard, reached by an external stairway and today we can still see the brackets that supported the landing, along the western side of the building. In the inner part of the portal the sliding gate closure channels are still evident and the passage itself is covered by a groin vault. The simplest façade faces towards the city and has, in line with the arch of the gate, a rectangular window decorated with intertwined tendrils, human and animal figures. On the left-hand side are the remains of an altar dedicated to Our Lady of Peace from the 14th century. There is a pointed arch in carved stone decorated with plant motifs and mouldings, resting on a ledge with anthropomorphic figures and fantastical subjects. On the tympanum is a lamb bearing the cross and traces of frescoes on the wall.