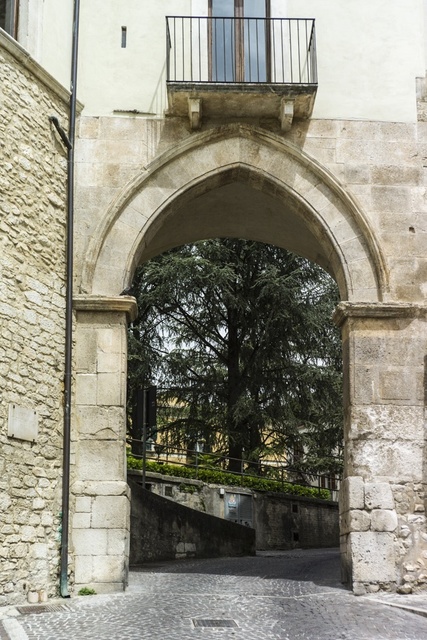 The gate is located at the southwest corner of the first early medieval city walls and is the only one still in fairly good condition from those of the original ring.


It was later strengthened by the opening of Porta Sant'Antonio, at the base of the ramp as part of the larger, second set of walls, built in the late 13th century and the beginning of the next century, to include within the town’s centre villages outside the walls that had developed in the meantime.


The first mention of the gate itself is in a document of 1196. In a previous document of 1109 however, characters known by the nickname of ‘Amabile’ are mentioned and then again subsequently in the Archive of the Cathedral of San Panfilo of 1320 there is a canon Amabile de’ figli Amabili.


This name or nickname may be the origin of the name of the door, literally Filiorum Amabilis, then contracted to Filiamabili. It is likely that the children of Amabile took on the burden of restoration and maintenance of the gate. There are indeed other examples of gates in Sulmona whose name is linked to people somehow involved in their construction or, more likely, in their restoration or other intervention. Later the access was known as "Donata Sciamuel", "of the goats" and, in more recent times, "Mancini", the surname of a family who were resident in the vicinity.

The current structures of the gate are probably 14th century, suggested by its comparison to other contemporary gates of the city’s second circle. The exterior of the front is faced in square ashlar stone that reaches up to the top of the pointed arch. The arch itself is decorated with a moulded cornice running along the top surface, set on ledges, and supported by strong piers of hewn stone. The inner passageway is plastered with the exception of a few blocks of stone set on both sides. It follows the contour of the curve of the barrel vault that covers the passage and supports the area above, which for a time was an armoury. Originally, the gate would not have had the current height we see now. The buildings that surround it on both sides today are considered subsequent additions and the balcony that sits on top of the outer arch, probably corresponds to the window of the armoury. The hinges which supported the closing doors are still preserved. About half way up the inner wall of the right-hand pier, is a small walled relief with a hunting scene, most likely taken from another buiding.