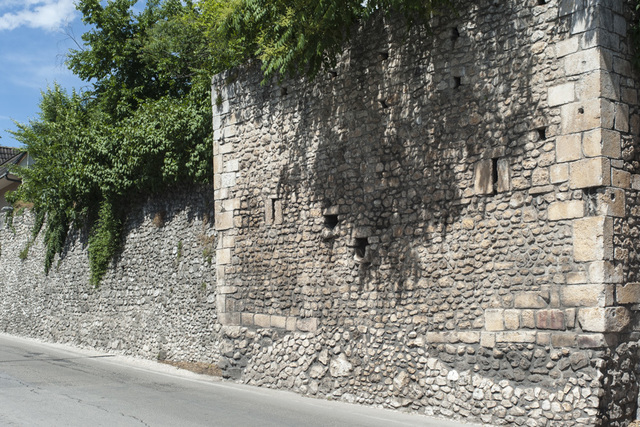 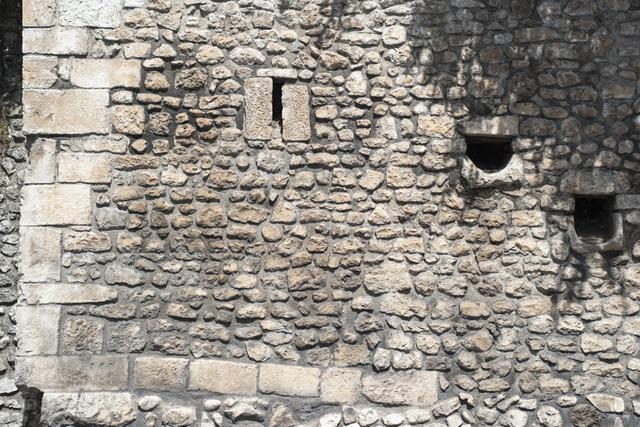 
The remains of the walls which are visible today, in opus incertum brickwork, dating back to the 14th century, are preserved in stretches near Porta Romana - in the northwest of the city - and along the present via Circonvallazione Orientale - between Porta Napoli and Porta Pacentrana and close to Porta Japasseri.   Nothing remains of the early medieval enclosure, nor of the Roman.

Of the seven original gates there remain only four.  The best preserved is Porta Filiamabili, although it was renovated at the beginning of the 14th century, during the construction of the second defensive circle.


Two other entrances, those of Porta Japasseri and Porta Bonomini, which remained in operation even after the divestment of the early medieval walls, have only the piers remaining, while the secondary entrance, known as Porta Molina, can be seen in its final form with the wooden doors still in situ.


Of the eight gates from the second wall only six remain.  They are all in good condition and are still in use, with the exception of Porta Napoli - which is no longer crossed by traffic - but which stands as a monumental symbol of the medieval city at the southern entrance to the old town.


The round tower in the northeast in the Japasseri district, as well as the quadrangular bastion on the west side which defended Porta Bonomini, could relate to an intervention probably commissioned by the Duke of Calabria during a visit to the fortifications which he completed in Abruzzo 1485.

It is likely that as early as the 3rd century BC the village of Sulmona was protected by a defensive enclosure. Certainly in the first century BC Sulmo was a fortified settlement. Caesar, in fact, in 49 BC speaks of it as a fortified city and in Ovid’s Amores he writes of "the walls of damp Sulmona". The ancient city was structured much like a castrum, a Roman camp, almost square and crossed in this case by a cardum and two decumani. The early Medieval walls were built from the Roman ones and certainly they kept the same size until about the 12th century. The city was served by six gates - one at either end of the cardo and one each at the four corners of the square - and also by a secondary entrance to the west. Each gate corresponded to an administrative district whose inhabitants were required to keep, maintain and reinforce the defensive walls. During the Swabian period, Sulmona assumed the role of capital of the region. The prosperous socio-economic situation and geographical centrality favoured its population and the settlements of various monastic orders. Soon, however, the urban areas were saturated and began to occupy areas outside the walls to the north and south. Any expansion out to the sides of the town was prevented by the presence of the Gizio and Vella rivers which formed natural barriers. In this way there arose six villages of varying sizes outside of the walls. During the Angevin period the expansion of the walls almost doubled the city’s size by incorporating the new settlements and the construction of some watch towers. The southern part of the new walls were completed by 1290 while, around 1302, the northern section was closed. The city then took on the spindle shape that still exists today and seven new gates were opened - one at either end of the extension of the main road and five at the entrance to the new villages. The modest Porta Saccoccia gate was added at a later date. Improvements and maintenance of the wall continued throughout the following centuries. In 1443, the reigning Alfonso of Aragon built square towers with sloping bases - only slightly protruding from the wall’s profile - both along the perimeter, and at the corners of the boundary at the gates. Over time the city wall lost its purely defensive role, although it still served to protect the city from mercenaries and epidemics, at least up to 1706, when a violent earthquake damaged it so severely that is signified the end of the Medieval city. This is confirmed by the fact that in the early 19th century, when they were creating an obstruction, the walls were demolished along with some of the gates, while other sections became incorporated into private buildings.