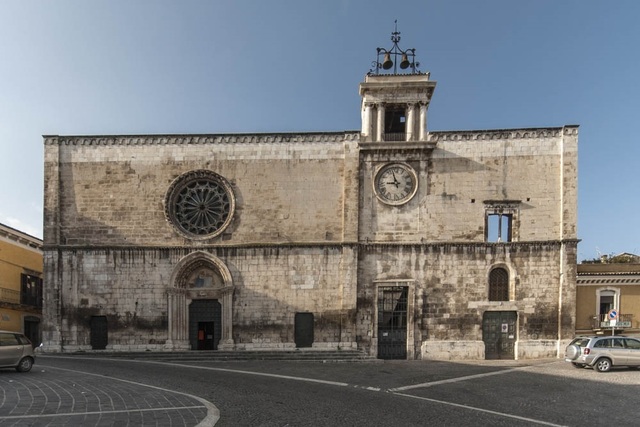 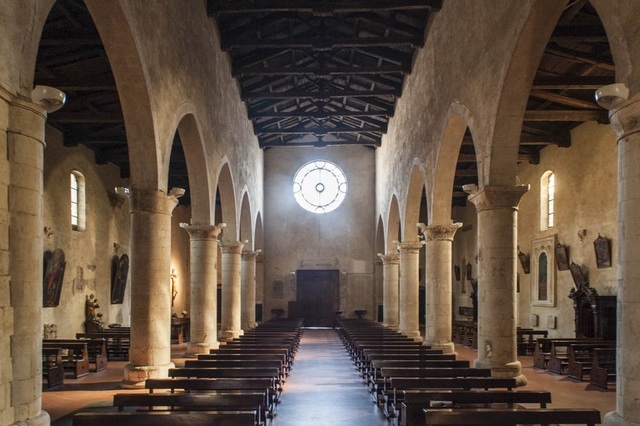 According to tradition, the church of Santa Maria della Tomba was built on the ruins of an ancient temple of Jupiter or, as reported by some local scholars, on part of what was to later become the home of the poet Ovid. The name derives instead from the existence of an ancient building, believed to be a tomb, which was located along the central nave, and was demolished in the 17th century. In fact the title of Santa Maria della Tomba is an abbreviation of the phrase "Santa Maria dalla Tomba Assunta in cielo", (The Assumption of the Holy Mary from the tomb up to Heaven) since the church is dedicated to the Virgin.


The first historical notes on the temple, which was counted amongst the most important religious buildings of Sulmona, date back to the 13th century. In the 14th century its prestige was such that it gave its name to an entire village. First called ‘Borgo Nuovo’ (new village) then Sant'Agata and then Santa Maria della Tomba, this area had gradually formed beyond the oldest part of the southern walls, near the market, where the main business activities and crafts were concentrated and therefore where there was more population growth and urban development.


Over the centuries the church has undergone several changes and renovations which have changed its original appearance.  It was completely enlarged and renovated between the 14th and 15th centuries, when the facade with its pointed portal and elegant rose window, acquired its present look. It was then stripped and greatly altered by subsequent modernizations in 1619 and in 1857, when the interior was completely transformed following the style of the time.


To the human interventions were added the effects of various earthquakes, particularly that of 1706, which completely destroyed the rear of the building.   What remained standing was the facade, the interior colonnade and the bell tower.


In the 1970’s the Superintendent of Architectural Heritage of the time, in a clumsy intervention, ordered the removal of the decorations and the Baroque superstructures to return the church to its original medieval appearance.


In the intervention the level of the roof structure was mistakenly raised, and to prevent the latter from exceeding the height of the main facade of the church, a new masonry crown was erected.  This is lighter in colour than the original  and gives an improbable decorative solution of blind arches.

After the earthquake in L'Aquila in 2009 the church was again the subject of consolidation work and masonry restoration aimed at improving its seismic response by inserting metal rods and channels in the walls of the building.

The façade is of the Abruzzo Romanesque type with horizontally crowning (slightly raised in 1970 with the addition of the last rows of stone blocks and decorated suspended arches), and is divided into two orders by a finely sculpted string course cornice. The portal, which is pointed and splayed, is similar in shape and proportions to those of other contemporary churches in Sulmona such as San Panfilo and San Francesco della Scarpa. It is consequently believed that its creator was perhaps one ‘Jacobu’, as is written inside the wooden shutters together with the date 1441, belonging to the school of Nicola Salvitti, who was responsible for the work in the cathedral. The profile of the portal is defined by a pair of octagonal columns on the outside and by smooth alternating pillars and columns resting on a stone plinth. The columns culminate in delicate capitals with acanthus leaves on which there is an archway consisting of twisted frames and flower mouldings with a diamond tip. At the centre of the lintel is a lamb crucifer in bas relief, and within the lunette there are traces of a fresco which are difficult to interpret and perhaps depict the Coronation of the Virgin. The central rosette, set in concentric circles, dates back to 1400. This we know by the inclusion on the upper bay of the name of the person who commissioned the work or, as seems more likely, the craftsman, a certain Palma de Amabile. The circular window, almost oversized compared to the facade, is very similar to those of L’Aquila from the 14th century and is distinguished by good modelling and the refinement of some decorative details characterized by acanthus leaves and twisted cord decorated with Angevin lilies. The circle right in the centre is adorned with trefoil, and on it rest sixteen octagonal columns laid out in a radial pattern, connected by arches. Finally in the very middle, there is an elegant crown of eight roses in relief with scrolls of acanthus. During that period there was a hospital attached to the church, of which today only the curtain wall facade with a mullioned window remains. The bell tower with a square section is from the second half of the 16th century, while the clock itself is 19th century.

Returned after the Baroque renovations to its ancient appearance, thanks to the restoration of the years 1969-72, The church offers a sober linear interior with a planimetric floor plan which is divided into three naves by massive pillars on which are set pointed arches - featuring a transept and three square apses. The ceiling is made from wooden trusses with a pitched roof, while the aisles receive light from large Gothic windows. The triumphal arch is supported by piers in the shape of a cross. It leads into the presbytery, which is slightly raised at the end in the main apse, and is positioned slightly to the left of the nave. It is thought that this architectural anomaly is a symbolic representation of the head of the crucified Christ reclining on his shoulder (inclinatio capitis). Fragments of the paintings on the perimter walls dating from the late 14th century were recovered from under the whitewash which had been added during the transformation of the interior made in 1857. Traces of these remain in the faded images of saints which are not accurately identifiable and in two representations of the Madonna and Child. The best-preserved painting is one which has the unusual iconography of Sant'Anna wrapping a cape around the Virgin and her son. There are also numerous fragments of frescoes from the 15th century and perhaps even later, which are mostly devotional. On the right upon entering, is the great bronze bell cast in 1314 by Bartholomew of Pisa. The inscription in Gothic script states that it was originally placed in the church of Saint Lucia, which was the branch office of the General Curia of the Celestine order. Along the right aisle are paintings in oil on canvas of the 16th and 17th centuries, from the baroque altars which were demolished during the last restoration. At the end of the aisle is the architrave portal of the sacristy, above which an inscription recalls the modernization work of 1619. To the right of the presbytery is the 18th century oratory of the Confraternity of Santa Maria di Loreto which is based in the parish. It features a single nave with an apse and dome cover. Shrines house the statues that take part in the sacred representation of the famous "Madonna che scappa in Piazza", on Easter morning, which is organized by the botherhood. These are the Virgin, the Risen Christ, St. Peter and St. John the Evangelist - all from the 18th century. Also in the presbytery are two valuable altarpieces from the 17th century from the nearby Abbey of Santo Spirito al Morrone, representing the Gospel episodes: the "Baptism of Christ" and the "Noli Me Tangere". An interesting bas-relief from the 13th century, on the left pillar of the transept, depicts Adam and Eve and the tree of sin and is stylistically similar to a work of the same name along the left wall of the church of Saint Lucia near Porta Napoli. In the left aisle, in a niche, there is the ceramic group of the Virgin and Child, from the School of Abruzzo, which is similar in style to the work of the sculptor Giacomo Silvestro. This work was either donated or sold to the Confraternity of Santa Maria di Loreto in 1580 and was placed on the altar that had been erected by them in the middle of the century.