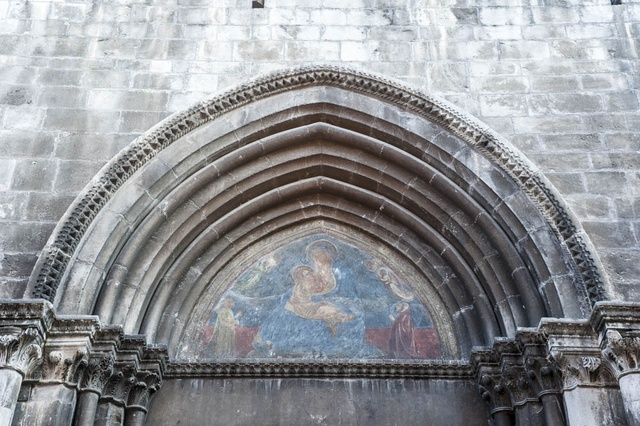 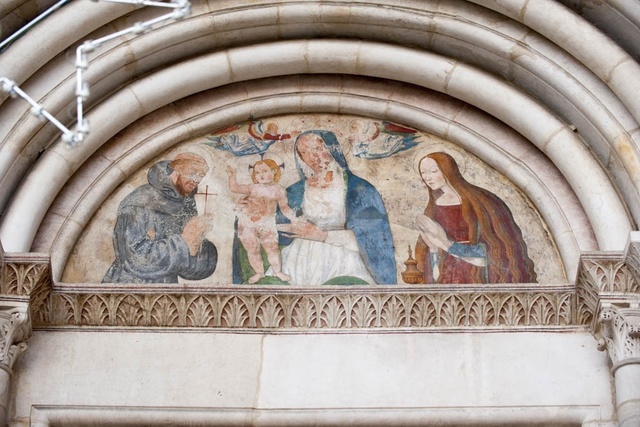 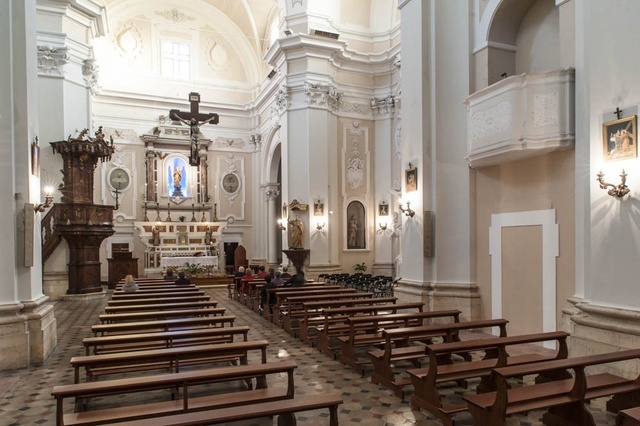 Timetables: The church is open from 9:00 to 19:00. The Rotonda is open only for special events.

The first mention of the church of San Francesco della Scarpa dates back to 1241, when its construction had already been completed.   In 1290, by order of King Charles II of Anjou, it was rebuilt and enlarged so as to be much more impressive than it had been previously, with the intetnion that it should be "the most important medieval Franciscan church of Abruzzo".

The renovated building presented complex and articulated, typically Gothic, compositional schemes.  The longitudinal floor plan had three naves covered by cross vaults and polygonal apses with arches and spans connecting the walls along the length and breadth of the presbytery.

The present church does not match that of the Angevin period as it largely collapsed following several earthquakes, and was subjected to an 18th century restoration.

The earthquake of 1456, in fact, had seriously compromised the structure, but what caused irreparable damage was the earthquake of 1706. The upper span collapsed at the front and the rose window and internal structures of the three naves were all lost.

The bell tower and the entire presbytery were ruined, of which now only a part of the perimeter of the polygonal apse remains, plus the monumental side entrance overlooking Corso Ovidio.  These have remained isolated from the main body of the new church, which was rebuilt smaller and with a nave .

The facade, which originally had a horizontal capstone, now has two protruding curved wings which were the result of the substantial downsizing of the internal structures. The transformation of the church, which originally had three naves, has created a unique internal environment. It is divided horizontally by a string course carved with acanthus leaves. The 14th century portal, perhaps by the same Nicholas of Salvitto who built the facade of the cathedral of San Panfilo, is well preserved. On a high plinth, stands the semicircular arch which is supported externally by two columns. These are flanked with alternating pillars and columns. The series of capitals is decorated with acanthus leaves. In the lunette is a fresco of the nursing Madonna between angels and followers (from the end of the 14th century). The windows on the sides of the portal are later additions. In the upper span of the facade only the frame of the canopy remains, in bas relief, while the entire work of the vaultl which decorated the interior has been lost. On the left-hand side of the church there is the outline of a further portal from the late Renaissance (now walled in) in which, in the middle of a broken pediment, we can see a coat of arms with the emblem of the Franciscan Order. On the left there is also a smaller portal, with simpler lines, built in the 19th century to allow access to a small oratory owned by the Brotherhood of Santa Maria degli Angeli.

The remains of the presbytery, which survived the earthquake of early 18th century, define the space, built in the 19th century, which is now known as "La Rotaonda", an elliptical courtyard onto which open out a series of small rooms which were used in the past as workshops. It is accessed through what was the side door of the old church, more imposing than that of its current facade, on the main road. Reached via a steep staircase, it is characterized by finely-crafted, deep, wide, splayed capitals. Six smooth columns alternate with five pillars on each side, resting on a sturdy base which become eleven arches gradually decreasing in size towards the edge. The painting of the early 16th century, features a Madonna and Child with St. Francis and Mary Magdalene. The monumental stone was built by Lombard master stonemasons who were present in Sulmona and had their chapel in the church. On the inner walls of the structures are barely readable traces of the apse frescoes dedicated to the titular saint of the church, painted in the 15th century by Andrea De Lithium. The barbican's side portal was built, according to tradition, after the earthquake of 1456 to reinforce this part of the building which had been severely damaged. It is covered with cut stone arranged in regular blocks. At the top there is a statue of St. Francis, while the bell tower houses three bells. To the left of the spur you can still see the remains of the polygonal apses and a single lancet window that illuminated the presbytery. Today "La Rotonda" is used for exhibitions and cultural events .

The palazzo that remains today shows a floorplan centred around two courtyards, similar to other Franciscan buildings. Everything else - the internal layout of the building and the facade which is covered with rusticated stone shaped into diamond points - dates back to later interventions. After the convent was closed in 1809, the building had various uses: first as a school, then a barracks, a market, and now as the town hall, thus losing all ties with the past.