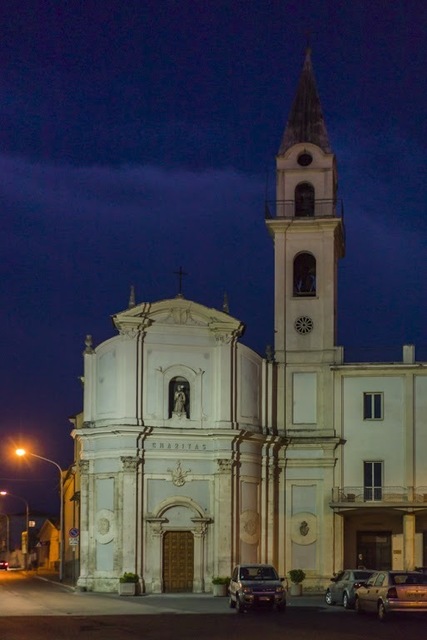 The Paolotti Fathers, from the Order of the Minimi of San Francesco di Paola, probably arrived in the city thanks to the Capograssi family who were very much devoted to the saint.  They settled in the area just outside Porta Napoli, where there was the small church of Santa Maria delle Grazie.

In 1619 the mayors of the City of Sulmona granted them this site together with some buildings and the adjacent land to allow for the construction of a new church and a convent which was started in 1620.

It is to Captain Vincenzo De Benedictis that we owe the enlargement of the church and the completion of the original convent, which he then gave to the order in 1662. The facilities, which were subsequently damaged by the earthquake of 1706, were later rebuilt and expanded starting from 1742.

Unfortunately the precarious economic situation of the religious order forced them to sell both the land and the property but also part of the convent which was later suppressed in 1770 and auctioned off to Don Nicola Antonio Trasmondi, the Marquis of Introdacqua.  So it was that the church was entrusted to the Bishop, and the Paolotti Fathers then left the city.

The church and the garden became a cemetery while the convent remained uninhabited until the arrival of the Capuchin Fathers who had in turn been forced in 1866 to leave the Convent of St. John the Evangelist due to the suppression of the religious orders.

Between 1875 and 1895, they bought the Convent of San Francesco di Paola and the nearby garden and settled there. The church, however, which was looked after by a hermit, remained in the possession of the bishop until 1906.

Over the years, the Capuchins decorated the church and enlarged the convent, adapting it to various functions over time. The date of 1931, inscribed on the threshold of the entrance, could refer to the renovation of the floor or other works on the building. Finally, in March 1956, the church of San Francesco di Paola, still entrusted to the care of the Capuchin Fathers, became a parish.  A fire which broke out inside the church in 1974, damaged the apse and the ancient choir, but was quickly restored.

The Baroque facade with a curvilinear base is divided into two horizontal spans of different heights by a cornice, and into three vertical sections by a double row of pilasters. At the centre of the lower section, the portal with architrave is surmounted by a lunette resting on slender pilasters extended with dosseret capitals. In the convex side areas the portal is flanked by two ovals with the emblem of the Minimi and the inscription Charitas enclosed within a blazing sun. At the centre of the upper span, in a vaulted niche, sits the statue of the titular saint made from Majella stone and a mixtilinear tympanum with a cross as the crowning part of the facade. On the right, slightly set back from the facade of the church, but as a continuation of it, is the square bell tower. Erected in 1966 and 30 metres high, it has two rows of mullioned windows on each side and ends with a pyramidal spire topped with a globe and cross. Next to it are the church halls which are contemporary with the bell tower. On the left-hand side of the church, in a small glazed niche, the 17th-century white Majella stone statue of Our Lady of Grace, acts as a reminder of the early church.

The Latin cross interior, rebuilt after the earthquake of 1706, is distinctly Baroque in style. The decorative stucco, and the many marble-effect surfaces, relate to later interventions from the 18th century. On the contra facade is the organ with a balustrade decorated with panels. The hall is flanked by two chapels to the sides of the transept, which are connected to it via arches resting on piers. The altars within them are without tables, however given the rather elaborate decor of the church we can safely assume their original presence. Currently three of them house a wooden confessional. The barrel-vaulted ceiling with lunettes, the walls of the nave, and the transept, are all decorated with paintings showing scenes from the life of the patron saint of the church, made in the 19th century by the Sulmonese painter Vincenzo Conti. In the middle of the dome is the dove of the Holy Spirit surrounded by the crest of the Paolotti while on the spandrels is a representation of the Tetramorph. In the apse, behind the white stone altar table, since 2007, a finely- worked, artistic, wooden, tabernacle temple, initially built for the Capuchin church of San Giacomo Maggiore in Campli in 1724 by Fra' Serafino from Nembo and Fra' Stefano from Chieti, has been located. On the back wall of the apse, in a niche, is the statue of San Francesco di Paola, and, on the apse ceiling, there is a large painting representing the Saint in Glory.