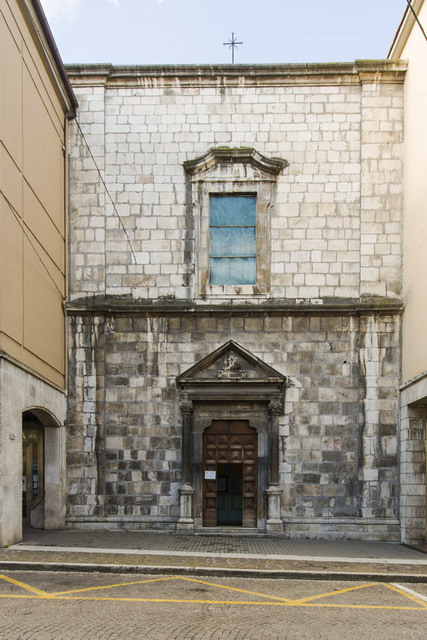 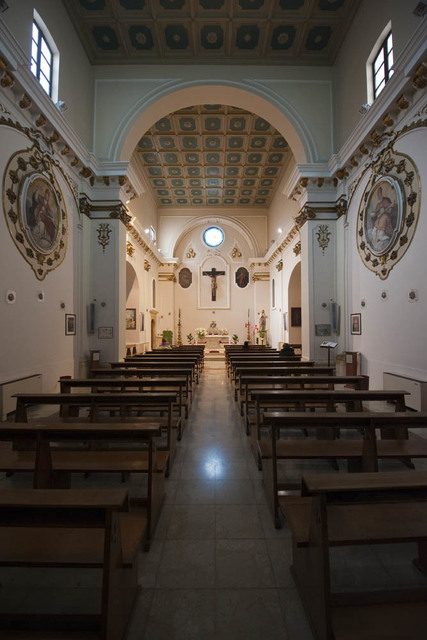 Located along the important road of Corso Ovidio, the church of SS. Trinity is documented from the beginning of the 16th century. Its history is closely linked to that of the confraternity of the same name, which established its headquarters there at the end of the 16th century, when the Celestini monks of the nearby Abbey Santo Spirito al Morrone conceded the church to them.  At that stage it was called San Giacomo in Cartolano but it then took the final dedication of SS. Trinity.
The church has, over time,  suffered many renovations and transformations that have profoundly changed the original layout. In the aftermath of the disastrous earthquake of 1706 both the façade and the interior were restored.  A portal with a bust of the Eternal Father inside the tympanum were added outside, and inside the floor plan was reduced to a single nave.
Between 1743 and 1744 the bell tower was rebuilt, to replace the one built by Master Cesare Lombardo in 1602, which had been destroyed.
In 1958, following the partial implementation of the "Aschieri" development plan, it was decided, among other things, to expand Corso Ovidio.  This necessitated the setting back of the facade by about eight meters to align with the rear of the new arcades. The result was a drastic reduction of the floor plan of the church - which changed the internal space - and the demolition of the bell tower and other important structures. Only later, beyond the triumphal arch, were two side arches opened which allowed the annexation of many areas, resulting in a sort of transept that turned the floor plan of the nave into a Latin cross.
More recently in 1999, despite the considerable losses and mutilations over time, a careful restoration returned the elegant decorations to the church.
The prerogative of the church is the Perpetual Adoration of the Blessed Sacrament, with the display of the Eucharist that has lasted continuously since World War II.

The façade, despite the drastic realignment, was thoroughly reconstructed in its original form. It was made of regular stone blocks, ending horizontally, and then laterally divided by pilasters and divided into two orders by a moulded string course, similar to that of the crown. In the lower span, resting on a plinth, the portal ledge opens, flanked by two columns of the composite order erected on high pedestals. It supports a moulded entablature topped by a triangular pediment, within which the stone bust of the Eternal Father is placed. The bust probably came from the ruined church of St. Augustine. In line with the portal there is a rectangular window, finished with a mixtilinear tympanum.

The church has a Latin cross, with a short single aisle, at the end of which are two side segmented arches which open onto the transept. The perimeter walls are punctuated by a series of fluted pilasters topped with capitals and embellished with gilding; coverage is provided by a plastered, coffered ceiling, decorated with stars and rosettes. This ceiling has obliterated that which was painted in 1915, and replaces the previous paintings, by the painter Carlo Patrignani from L’Aquila - a student of Teofilo Patini. On the inside wall, above the inner wooden door which was painted and gilded in 1931, is the modern organ which was built in 1966. The ebony choir from 1761 is the work of Ferdinando Mosca, who in the same year, also made the two walnut confessionals. The balustrade of the stage organ, with a mixtilinear profile, shows six panels with scenes from the Old and New Testaments by the painter Crescenzo Pizzala (1774 - 1777). To the same author are also attributed the two painted medallions in gilded stucco frames on the side walls, depicting the Doctors of the Church in Glory. In the centre of the presbytery there is a wooden crucifix, of the local school, allegedly made in the 16th century. At the end of the left-hand transept, set against the imposing sacristy doors, are three statues in niches. Two of these are from the 18th century: at the centre is the Risen Christ, attributed to the Neapolitan sculptor Gennaro Franzese and, on the right, St. Isidore Agricoltore. The work, signed by Giacomo Colombo and dated 1715, is from the Church of St. Philip. In the casket on the left is the modern statue of San Lorenzo.

The Confraternity of SS. Trinity

The church has been the headquarters of the confraternity since the 16th century. The ancient secular association of SS. Trinita, which has been in existence since the early 14th century, was responsibile for the care of pilgrims, convalescents and the souls of the dead. It also performed acts of charity in the community. The confraternity is also responsibile for the evocative annual Procession of the Dead Christ which, on the evening of Good Friday, starts from the church and continues through the streets of the old town. The procession features the statues of the dead Christ and Our Lady of Sorrows, accompanied by lamplight and a choir of male voices singing the Miserere.