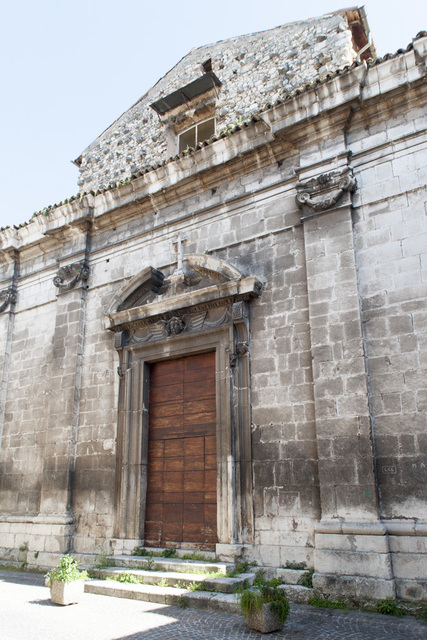 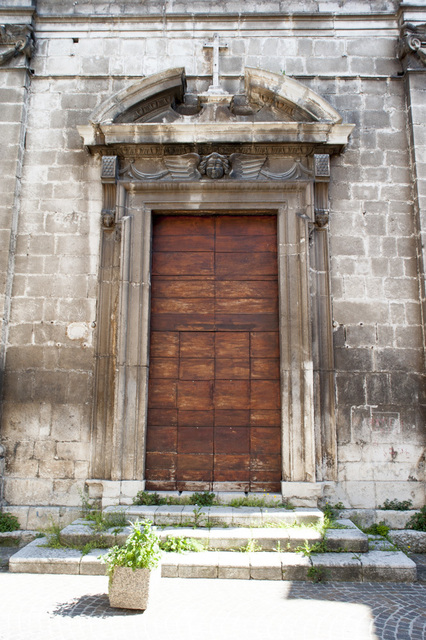 The church has ancient origins and is in fact mentioned both in a notarial document of 1266 and in the city’s cadastral records of 1376. Originally, it was smaller but was enlarged in the mid 17th century.  The facade however, remained unfinished. The building in its current form is the result of the 18th century reconstruction following the earthquake of 1706.

The block stone façade is divided into three by an order of Ionic pilasters which frame the main portal in the middle. Reached via three steps it has a rectangular form with a moulded frame. In turn it is framed by pillasters surmounted by corbels supporting a broken pediment that has at its centre the pattern of a cross. The lintel features the relief of the head of a winged cherub. The upper section, uncompleted, has rustic masonry and a central window that lights the church behind. From the lunette above the small semi-circular portal, on the left-hand side of the building, a 15th century fresco depicting the Madonna and Child with Saints, was removed in the late 19th century for reasons of conservation and is now on diplay in the Fresco and Jewellery Hall of the medieval-modern section of the Civic Museums of the SS. Annunziata.

The floor plan of the church is a barrel-vaulted hall, with six side chapels (three per side) with many altars. On the counter-facade there was a wooden choir which at one time housed an 18th century organ of which today little remains. There also used to be a bronze bell from 1492 engraved with the city’s coat of arms and a wooden crucifix painted in tempera from the 15th century. This belonged to the ruined church of St. Augustine. The cross, depicting the Eternal Father and Mourners has resulted in an attribution to Giovanni da Sulmona, an important painter active in the 15th century. Both works are now kept in the Diocesan Civic Museums of Santa Chiara.