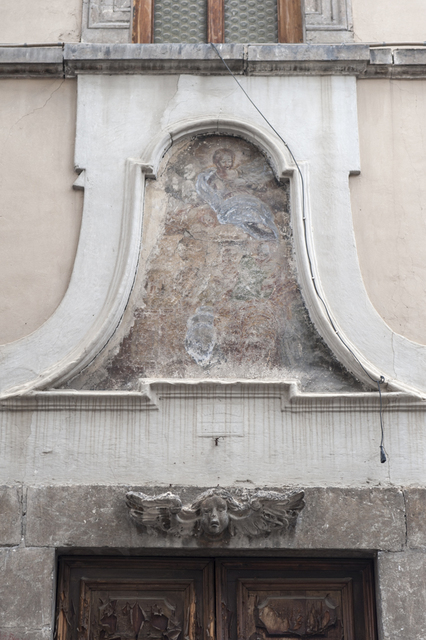 We do not know the exact period of construction of this building however its present form would suggest reconstruction works following the earthquake of 1706.
On the front door there used to be insignias, which are no longer visible, of the Merlini family -  one of the oldest and most aristocratic families of Sulmona which died out in the mid 17th century. The three letters that were once engraved on the church - MEP - According to the Sulmonese scholar Francesco Sardi de Letto could mean "Merlinorum erat Parochia".

The small church within the combined parishes of San Giovanni della Postergola and San Giovanni was a parish church until about 1910, when the title was transferred to the church of San Francesco della Scarpa.

The facade is plastered and bound by two massive cantonal stones and is divided into two levels by a thin string course. In the middle of the lintel above the portal there is an angel head in high relief. Above the door there is a bell shaped frame containing a fresco in poor condition. At the centre of the upper part there is a simple rectangular stone window to which were added three other windows of equal shape and of uncertain work on both the perimeter walls. Some of the material used in the construction of the church was reused from previous buildings as we can see by the unique presence of a small statue head, probably from the Roman era, set into the right-hand preimeter wall of the church.

The church is of modest size with a single hall. The altar along the rear wall is flanked by two niches. Besides some valuable liturgical objects, it also houses a group of sculptures depicting Faith and Charity - a work from the 20th century made from different materials. Worked in high relief, it is by Giovanni Feneziani- a sculptor and painter from L’Aquila who was active in the first half of the 20th century. The manufacturing technique of concrete and iron, used for the figures, is frequently found in the works of Feneziani kept in other churches of with the Abruzzo province of L'Aquila.