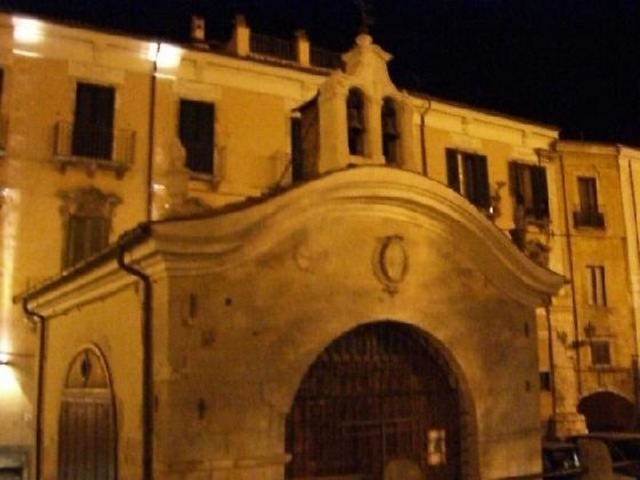 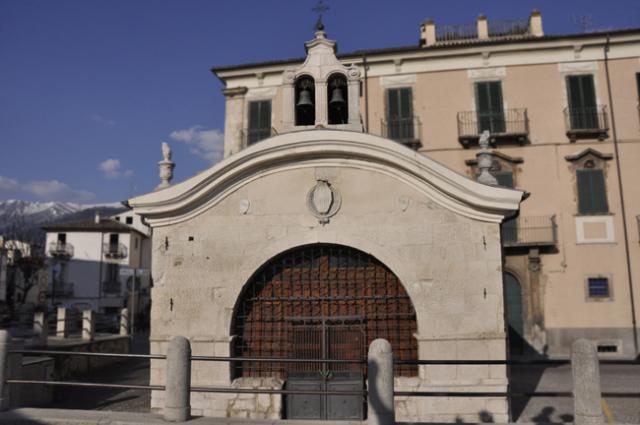 Located on the eastern side of Piazza Garibaldi, set apart from the surrounding buildings, the small church of San Rocco was built in the 15th century. It was formerly named for San Sebastian and the change of dedication was perhaps due to a severe epidemic that spread thoughout Sulmona in the second half of the century, strengthening the faithful's devotion to the saint, who was a protector against the plague.


It was donated in 1484 by Queen Giovanna of Aragon, the princess of Sulmona, to the Casa Santa Annunziata - as is proved by the presence of the Aragon coat of arms at the centre of the façade between those of the Holy Authority and the City of Sulmona.


The unusual style - a square with wide arches on three sides - is thought to relate to its use for the blessing of the riders participating in the Giostra, which was held in the main square. More probably, given the floor plan as well as its relatively small size and its location, it would have originally had a different use.


Some scholars consider that these characteristics suggest that its function was that of the headquarters of ‘The People’. In the 15th century the representative of the people held a seat in the city government together with those elected by the Seat of the Nobles, as stipulated in a law by King Ferrante of Aragon.


The Book of Memories of the Casa Santa Annunziata provides information on some measures relating to the church. In 1497 it was surrounded by a railing to allow the market goers to see it from all sides of the square and thus participate in the morning Mass, In 1521, some of the faithful commissioned paintings to decorate the interior of the chapel.


The disastrous earthquake of November 1706 that destroyed almost all of the monuments and houses in Sulmona, also caused the collapse of the upper part of the building, which was later rebuilt in the Baroque style.

The small church has a simple structure with a square floorplan where, on three sides, there is a large, central semi-circular arch. The façade which overlooks the square has a curvilinear crowning, which is convex in the centre, and is decoratively shaped like a lantern. On its roof stands a small belltower clearly of Baroque style, with elegant fluted pilasters that frame two rounded arches within which are the two bells. The arches are joined at the top with a scrolling of mixtilinear profile. The restoration, which was carried out in 1992, showed how the church had originally been covered by a barrel vault which was replaced in the 18th century by the current dome. The restoration work also revealed the presence of painted surfaces.

The small room has a single nave covered with a circular, coffered dome. It contains a statue of San Rocco, a well-made devotional work, dating from the late Baroque period of the Neapolitan school, and proved to be the work of Giacomo Colombo. Part of the furnishings of the church also included a silver statue of the patron saint dating from the first half of the 16th century. It rested on a cylindrical base with a slot where coins for alms could be inserted. The object of the Sulmona school, was donated by Camilla of Giovanni de Capite, and was displayed on the feast of the Saint (August 16); at the behest of the donor. In 1544 the statue was placed together with other silver owned by the church of SS. Annunziata and it’s now kept in the Jeweller’s room of the Civic Museum.