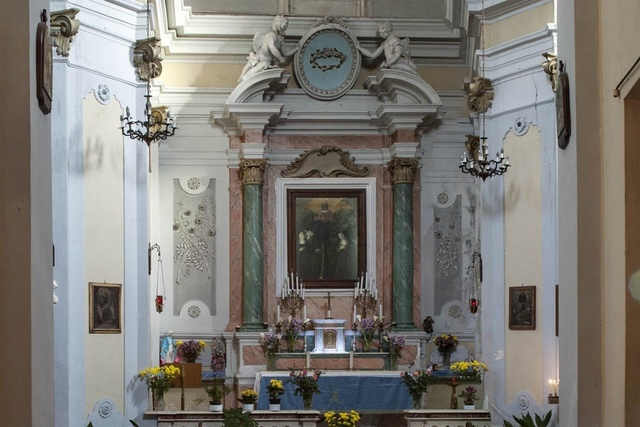 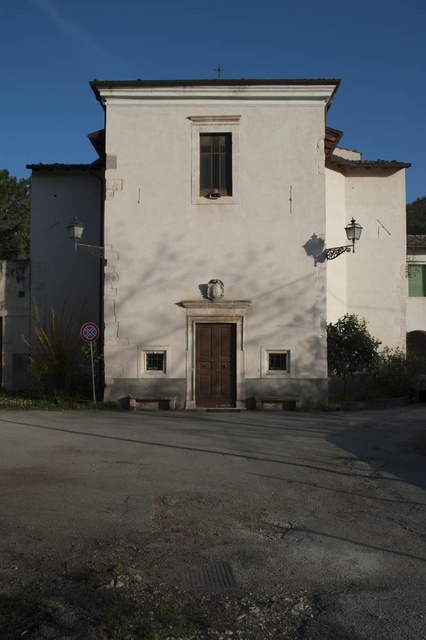 The small church was built in the late 16th century by the Capuchin Fathers, who arrived in Sulmona in about that time.  It was built about three kilometres from the city in the quiet and pleasant area of ​​Colle Savente, where there was already a small oratory dedicated to San Girolamo.


Its foundation seems to date back to 1575-80.  The structure, made up of the church and convent, was very modest at the beginning and was dedicated to Our Lady of the Cross. It was gradually expanded thanks to the generosity of Baron Pompeo Tabassi, using materials taken from the nearby ruined church of San Pietro Terrazzano. It seems that the new title of Incoronata is attributable to the special devotion that shepherds on the Transhumance from Abruzzo to Puglia felt towards the Virgin, after her noted appearance  in Foggia in the year 1001.


Due to its isolation and excessive distance from the city centre, and to continuing acts of banditry, the Capuchin Fathers were forced in 1658 to move permanently to a more secure site - put at their disposal by the noble Sardi family - outside Porta Pacentrana, where today the church of San Giovanni Evangelista stands.  The monastery was sold into private hands.

Following the earthquake that struck the city in 1706, the church was almost completely destroyed and was rebuilt in 1718 at the expense of the owners - the barons Mazzara - and radically transformed until it assumed its present appearance of a Greek cross.

The sacred building is still a pilgrimage site and the Madonna Incoronata is an object of devotion, as witnessed by the numerous votives on display inside.

The façade of the church is very simple with a horizontal crowning. The middle section is characterised at the bottom, by the presence of simple door with a moulded horizontal crowning, over which the twisted oval shield of the Mazzara family coat of arms is positioned. Two small stone tile windows with moulded frames provide light inside the church together with a rectangular window above. On the right-hand side of the church is the former convent building with a short porch consisting of two segmented arches.

The interior of the church, as well as the exterior elevation, has no particular artisitc value, in common with other simple rural churches. The floor plan is a Greek cross with a domed roof and cylindrical lantern. Four of the corner plumes are painted with many Mazzara family crests. A fifth features a stucco figure in the centre of the front of the main altar, on which there is an oil painting on canvas by an unknown artist (from the 17th to the 18th centuries) with the Crowned Virgin enthroned between the branches of an oak tree, a memory of the apparition of the Virgin to the Count of Guevara in the woods in Cervaro Puglia. The iconography of the Sulmona picture differs from the Foggia prototype in several elements. These include the presence, at the foot of the oak, of two sisters in adoration, identified as the blessed Alexandrina and Gemma de Letto, who lived in the late 14th century and the first half the 15th century. It is a later addition that recalls the former ownership of the church by the de Letto family who donated it to the Mazzara family in 1709. Three other paintings by an unknown artist of the 19th century - placed on the side altars - and a plaque commemorating the reconstruction of the church at the expense of the barons Mazzara in 1718, complete the interior design which includes numerous votives placed along the walls as its most characteristic feature.