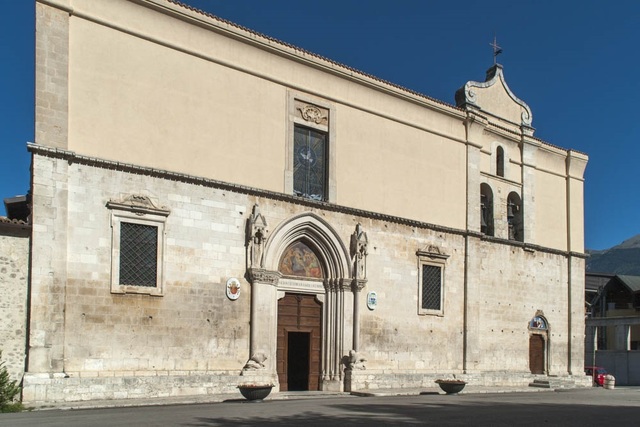 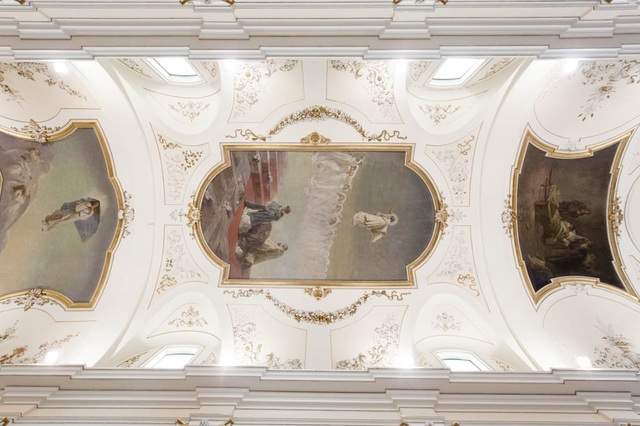 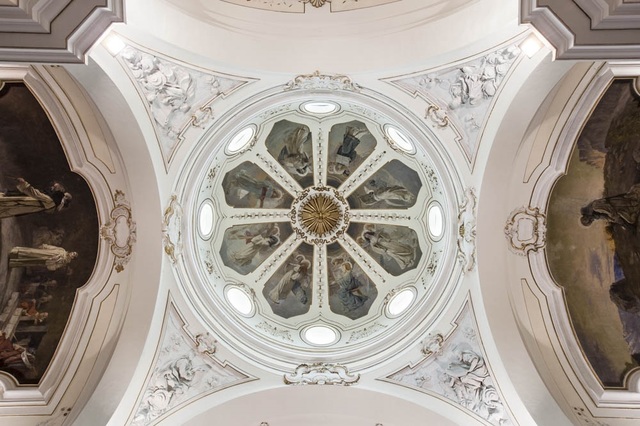 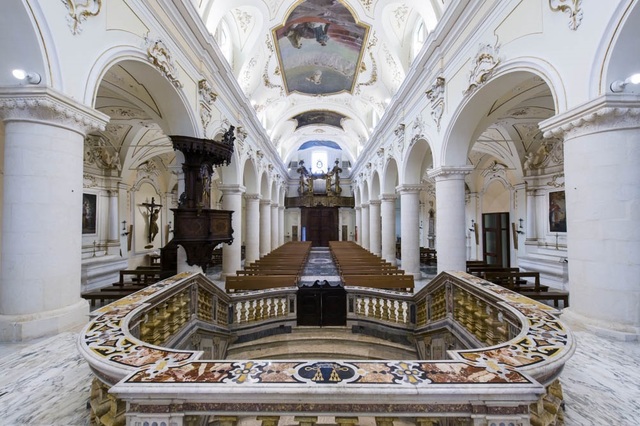 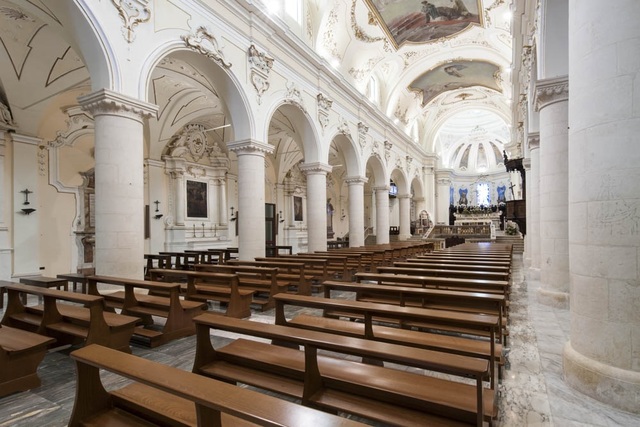 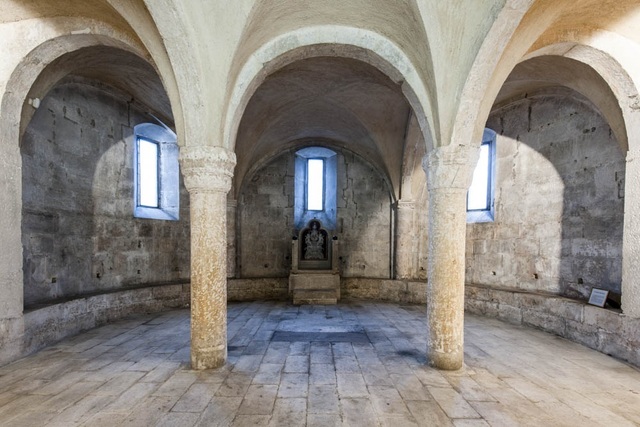 The cathedral is dedicated to Bishop San Panfilo - protector of the city - and is the oldest church in Sulmona. It is located at the northern end of the town, at quite a distance from its original historical centre. According to tradition it was built in the 8th century on the ruins of a pagan temple dedicated to Apollo and Vesta.  Another local legend suggests that after the death of the saint, his remains were moved from Corfinio to Sulmona and during transport they became so heavy that the carriers were forced to deposit them at the point where the church was later built.


Leaving aside these ideas, we know about the first historical cathedral from the Chronicon Casauriense (a valuable collection of facts and documents relating to the nearby Benedictine Monastery of San Clemente a Casauria, dating from the 12th century), which refers to an important building work undertaken in 1075 by Bishop Trasmondo and completed in 1119 by Bishop Walter.


Over the following centuries the church withstood fires and devastation that, together with the scourge of earthquakes that hit the territory repeatedly (in 1349, 1456 and the most disastrous in 1706), led to the depletion of the cathedral’s funds and the valuable chapter archive.


The earthquake of 1706, above all, seriously damaged the cathedral: the sacristy collapsed and the 14th-century bell tower and the adjacent bishop's palace suffered considerable damage and were not rebuilt. Subsequent restoration work mainly concerned the upper part of the building including the vaults of the three naves and the elegant stucco decorations and paintings in the new baroque style.


The oldest structures which survived the destruction, and still remain today, are the floor plan with the Romanesque colonnade, the crypt and part of the outer wall of the imposing semicircular stone apses. Also remaining from the original building is the small portal located on the left-hand side of the building, which connected the church to the Bishop’s residence which is very deteriorated by time and dates back to the 13th century.  It has an inscription on the lintel in Lombard characters and fragments of Roman inscriptions in the lunette, which at one time was almost certainly frescoed.


The monument today is therefore the result of numerous restorations with a complex and layered  architectural history.

The façade with horizontal crowning is divided into two levels by a string course with acanthus leaves and thistle. The upper portion, rebuilt after the terrible earthquake of 1706, lacks the original rose window which was replaced by a large rectangular window. The lower section however still has the ogival portal, by the master sculptor Nicola Salvitti from Spoleto who, in 1391 on behalf of Bishop Bartolomeo De Petrinis, worked on the front of the church, along with other workers from Umbria and Le Marche. The splayed portal with a pointed profile, and the capitals of the columns and pillars, are finely carved in stone with rich floral motifs. The two outer columns rest on lions which have badly deteriorated and support two niches in an exquisite Gothic style, with the statues of San Panfilo on the right and San Pelino on the left - the patrons of the diocese. The lunette above the door is painted with a Deposition scene from the 15th century, attributed to the so-called "Master of the Caldora Chapel", the unknown painter of the series of paintings in the chapel of the nearby Abbey of the Santo Spirito al Morrone. They belong to the Romanesque phase of the building, together with the portal along the left-hand side, and the three apses which are divided horizontally by a frame of hanging arches resting on corbels and are variously adorned with animal heads, women, rosettes and acanthus leaves. In the central apse we can see the old city coat of arms (with the nail and shield still visible) with the letters SMPE, engraved in Gothic letters on the upper band. The right wing of the facade was added in a later period. The side door that leads to the sacristy dates back to 1501, as we can see by the inscription inserted into the masonry, while the small bell tower which was erected in 1751 replaced that from the 14th century which had been destroyed by an earthquake.

Largely the result of work undertaken between the 18th and 19th centuries, the ancient medieval basilica with three naves and three semicircular apses and a transept is however still evident. Even the Romanesque columns in stone, on which arches are set, are part of the original building. Most of the rest is characterised by superstructures and baroque decorations. The hemispherical dome, which is concealed from the outside by a polygonal lantern, is an 18th-century construction added to the original building. The presbytery is elevated by the presence of the crypt below it and is connected to the floor of the nave by two symmetrical staircases, edged by a balustrade with fine marble inlay. In the southern transept, beyond a 19th century wrought iron gate, lies the chapel of Santa Teresa, where a wooden sculpture depicting the 18th-century saint in ecstasy, by the Neapolitan sculptor Giacomo Colombo is placed in the altar. At the opposite end the chapel of SS. Sacramento was opened in the 19th century. On the barrel vault with lunettes covering the nave there are stucco frames that feature tempera paintings by local painter Amedeo Tedeschi (early 20th century), depicting episodes from the life of St. Panfilo and Celestine V. On both sides of the entrance, on the walls of the counter-facade, there are two tombs. On the left is that of the Bishop of Sulmona Bartolomeo De Petrinis, pictured lying on the sarcophagus in his pontifical vestments, while on the panels of the wall we can see the Pieta in the middle and the Annunciation at the sides. The mausoleum, which has been attributed to the Abruzzese sculptor and goldsmith Nicola da Guardiagrele, was built in 1422 and features a fresco of the Crucifixion with the Virgin and St. John the Evangelist, around which there are the remains of other paintings with scenes from the life of Jesus. On the right-hand side a second mausoleum, very similar in type and scale to the previous one, but less artistically valuable, belongs according to tradition to the sister of the bishop, represented here on her funeral bed. In front of the sarcophagus is the Redeemer with bishop Saints in prayer. Above the inner door there is a precious mechanical organ with choir in carved and gilded wood from the 18th century and paintings of three angelic musicians on the ceiling. Various altars with canvas paintings line the walls of the aisles; in the middle of the right-hand nave stands a wooden crucifix from the 14th century, it was moved here from the crypt, and is believed to have been a gift from Pope Innocent VII of Sulmona to the cathedral where he was baptized. The marble marquetry baptismal font, in the chapel at the beginning of the left-hand aisle, was built in 1757 by the Neapolitan Giuseppe Bastianelli (or Bastelli), who worked at least in part on the main altar, where he used the same marquetry technique. There are also two carved choir stalls from 1751 by Ferdinando Mosca, who also designed the two confessionals and, in all probability, also the pulpit and the singing gallery on the counter-facade.

The crypt is accessed via three staircases: the most imposing one at the centre - built in the 17th century at the end of the nave - and two lateral more modest staircases, perhaps older, all inlaid with marble balustrades. The crypt, along with the three semicircular apses, is the oldest and best preserved part of the building. Recent studies have identified various phases of construction even before those associated with the intervention of the bishop Trasmondo. In particular it is believed that the central columns, with solid monolithic local limestone capitals - each different to the others - both for their construction and for their ornamentation - probably date back to the 9th and 10th centuries, while the entire perimeter of the apses, with a stylistic construction which is very different from the central section, is instead attributable to the Trasmodo renovations at end of the 11th and the beginning of the 12th century. The room occupies the entire space of the presbytery above and was divided into three aisles by 16 transverse columns. The columns were later reduced in number to 14 to create space for the construction of the 17th century altar dedicated to San Panfilo. The three rows of columns are placed at irregular distances and are not perfectly aligned, and as a result the quadrature of the cross vaults has a certain irregularity. At the foot of the central staircase is the Chapel of San Panfilo with an altar of local stone inlaid with coloured marble. The rectangular shrine was built in 1662 to thank the patron saint for miraculously saving the city from the horrors of the 1656 plague that had fallen on the Kingdom of Naples. Inside the altar, kept in a special niche, is the reliquary bust of San Panfilo. Made in 1458 - 1459 by the Sulmonese goldsmith Giovanni di Marino di Cicco, it is constructed from gilded copper, silver with fine enamel work. It is brought out and carried aloft every year in the procession of the saint’s feast day on April 28. Inside the crypt there is an interesting polychrome stone Madonna and Child bas-relief from the 12th century. It is called "Madonna of the furnaces" because, according to tradition, it came from the nearby village of Pinciaro, to the west of the city, where the furnaces for the production of roof tiles or shingles were sited. However, it is more likely to be a sculptural relief inserted inside the decorative programme of the Romanesque church, as is attested by the clear similarity with contemporary sculptures of the nearby abbeys of San Clemente a Casauria and San Pelino in Corfinio, where, respectively, they are located on the right portal and inside the cathedral. The bishop's throne was probably reconstructed in the 17th century with reused material from the late 12th century or the beginning of the 13th century as we can see by the dates of the two lateral marble slabs decorated with rosettes in relief. The back of the throne is definitely even older and is painted with a pair of angels holding up a coat of arms. There are also two Roman weights which have been used as knobs. This work is believed to have originally been located in a different position. On the right side of the crypt there is a niche tomb monument from the late 14th century, with a pointed arcosolium and a tympanum with the Lamb of God at the top. The fresco on the back wall depicts a Madonna and Child with the Archangel Michael and St. John the Baptist. On the ceiling there is a medallion with Christ among evangelical symbols. On the front of the sarcophagus there are traces of a sinopia preliminary sketch depicting an unknown reclining knight. Along the side walls there are two rows of wooden benches from the 16th century choir built by Bartolomeo Balcone for the cathedral, which were then replaced in the mid-18th century with the ones still present in the presbytery above. The adjacent room is dedicated to Celestine V, the charismatic spiritual figure linked to the city, known as the Pope of the "great refusal" by Dante. In the Celestine chapel are kept some of his precious relics and memorabilia: a part of his heart kept in a precious reliquary; some clothes and vestments, a bust, a wooden crucifix from the hermitage of Sant'Onofrio al Morrone, some important documents and his penitential chain.