Church of Santo Spirito a Morrone

Church of Santo Spirito a Morrone 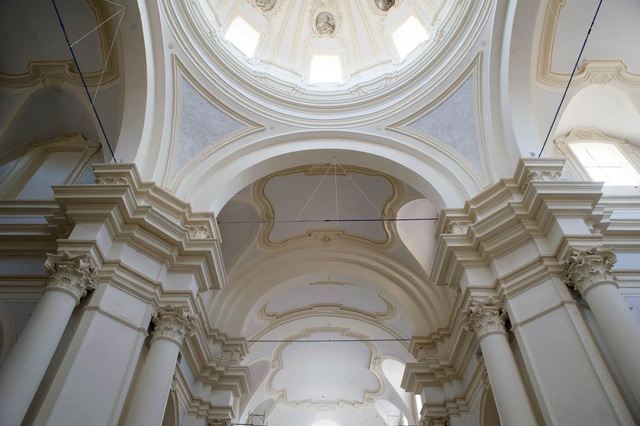 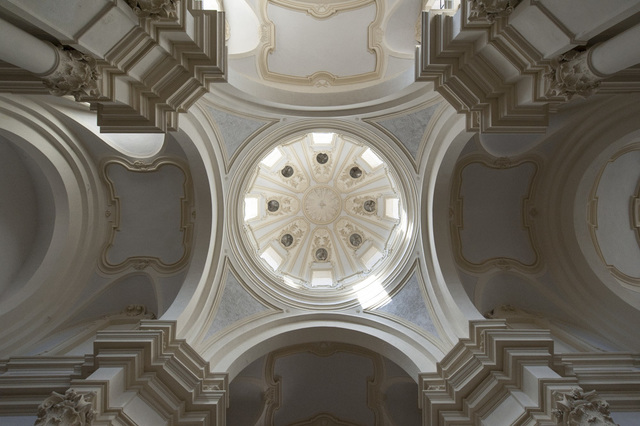 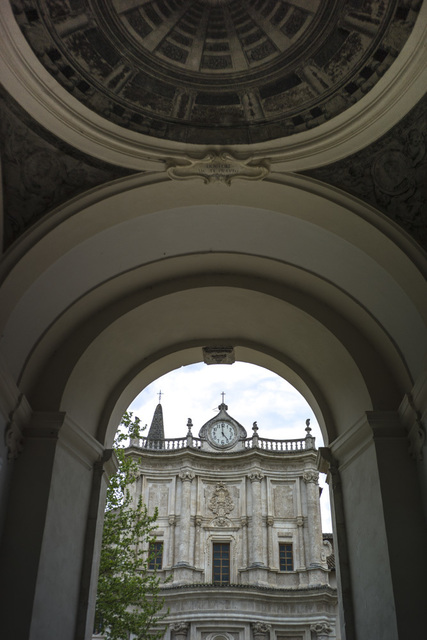 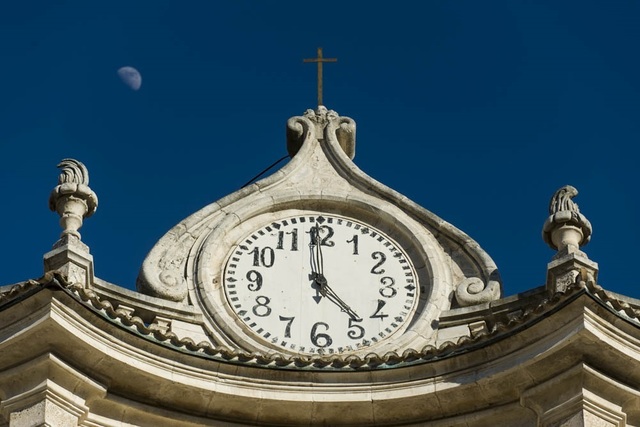 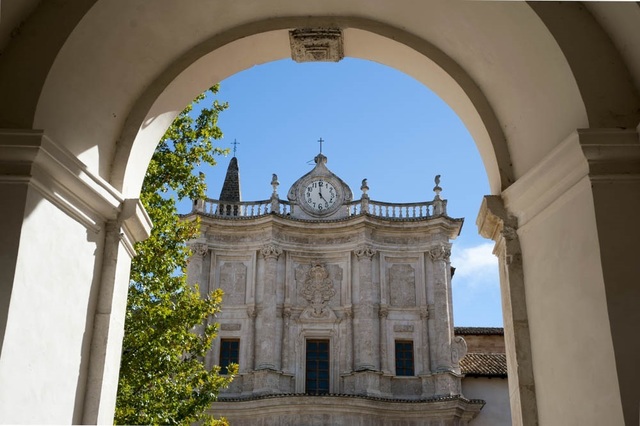 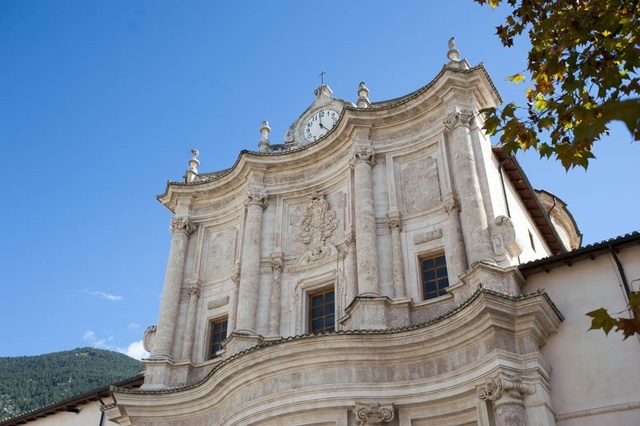 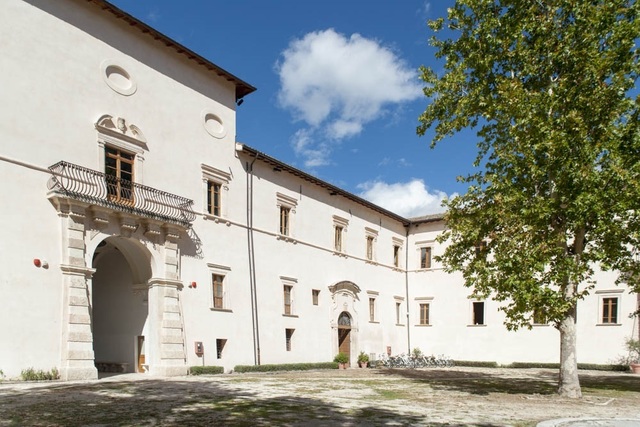 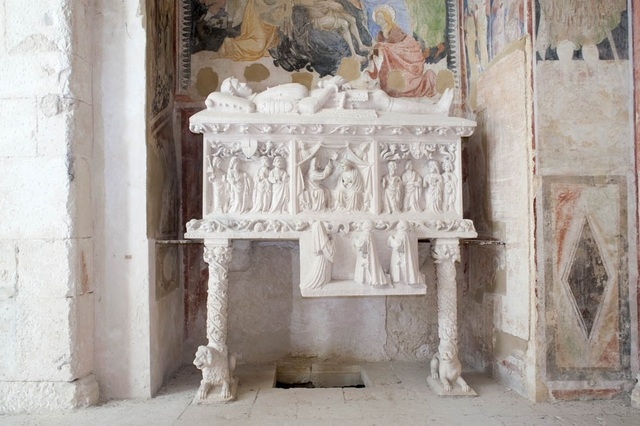 
The building is part of the abbey of the same name, and has for centuries shared its history. The complex, built in the mid-13th century on the slopes of Mount Morrone is the extension of an existing chapel dedicated to Santa Maria del Morrone. At the behest of the future Pope Celestine V, the construction of a new church was begun in 1268 which was dedicated to the Holy Spirit, and included the adjoining convent, which in 1293, became the seat of the Abbot General of the Order of Celestine.

In 1596 the abbey was restored and enlarged and, under Abbot Donato di Taranto, the church was equipped with a square bell tower with mullioned windows on all four sides, and crowned by a pyramidal spire, like that of the SS. Annunziata in Sulmona. Extensive damage was caused by the earthquake of 1706, after which substantial restoration work continued until 1730, as documented by the date on the clock of the church, by the Neapolitan Giovanni De Sanctis.

The central courtyard of the abbey, known as "the planes" is the churchyard which leads to another two courtyards, "of the nobles" to the left of the façade and "of the well" on the other side, which remains unfinished. The front, attributed to Donato Rocco from Pescocostanzo dates from the first half of the 18th century. The alternating concave and convex lines, and the use of the giant columns, resemble Borromini's San Carlo alle Quattro Fontane. The portal and architrave, flanked by Ionic columns on a high base, are topped by a square frame that surrounds an arched niche. Enormous semi Ionic columns divide the facade vertically into three and there are separate upper and lower pairs of panels, framed with white stone, that contrast with the central panels made from a rough, pinkish stone A high undulating entablature divides the facade horizontally, where the upper order of rectangular panels is repeated above the side sections. Above the central French door stands a majestic baroque pediment in relief. The balustrade at the top, featuring pillars at intervals which connect the facade with the sky, has a large central clock with a cross on the top. The use of a rough and compact limestone accentuates the dynamic chiaroscuro effect.

Following the earthquake of 1706, the original longitudinal plan of the church was transformed into a Greek cross, with a central dome and Corinthian columns, and the longitudinal axis was extended into the apse. The interior features altars in multi-coloured marble, stucco decorations and fine wood furnishings which include the choir organ of 1681 in the counter-facade. It is decorated with landscape paintings and is the work of the Milanese Giovan Battista del Frate assisted by Francesco Caldarella of Santo Stefano, who completed the gilding. The choir itself, with two rows of stalls in carved walnut, is the work of Leonardo Marchione of Pacentro from 1722. The paintings include the portraits of the abbots in the dome, executed in monochrome by Joseph Martinez in the first half of the 18th century, and the large canvas of the Neapolitan school from the 16th century featuring the Descent of the Holy Spirit in the centre of the apse. Two further paintings, depicting St. Benedict (1758) and the Apotheosis of St. Peter Celestine (1750), painted respectively by the Bohemian painter Antonio Raphael Mengs and the Neapolitan Giovanni Conca, previously occupied the two ends of the transept. They are now on display in the Civic Museums of the Annunziata in Sulmona, together with other paintings from the abbey including a Madonna and Child, a Nursing Madonna with Saints and the altarpiece of Saint Catherine and Saint Lucia attributed to Giuseppe Simonelli, student and assistant of Luca Giordano, dating from the late 17th century. The choir of the church leads through two entrance ways to the famous Caldora Chapel and, via a narrow staircase, to the small underground church.

Better known simply as the Caldora chapel, this annex of the church houses in a niche the tomb created in 1412 by the German sculptor Gualtiero d’Alemagna which was commissioned by noblewoman Rita Cantelmo, the widow of Giovanni Antonio Caldora, for him and his three sons, Jacopo, Raimondo and Restaino. The latter is identifiable as the figure in armour lying on the sarcophagus, while in a panel placed below, the other three are shown kneeling. The front of the casing, supported by columns decorated with vines, is divided into three panels carved in relief with the Coronation of the Virgin in the centre and groups of apostles and saints on the sides. On the walls of the chapel there is an important series of paintings, with at its centre the Lamentation, which forms the background of the monument, in addition to the Nativity of the Virgin, and a warrior with halo. The other two walls show angelic hosts and twelve episodes from the life of Christ. The unknown author was given the name Master of the Caldora Chapel, an artistic personality characterized by strong expressionism, which is particular evident in the main scene in the assimilation of pain of the two mothers, the Virgin and Rita Cantelmo, for the loss of their sons. More recent studies suggest that the execution of the frescoes was almost contemporary with that of the sculpture and therefore the dating of the cycle should be at the beginning of the 15th century, if not precisely 1412 - the year of completion of the memorial.

Under the presbytery of the church is a vast medieval crypt, with an irregular layout featuring columns with capitals painted with geometric patterns. In addition there are decorative bands and octagonal columns supporting the cross vault. On the perimeter wall is a fresco from the early 14th century, commonly accepted as St. Peter Celestine giving out the rule.