Church and Convent of Sant’Antonio

Church and Convent of Sant’Antonio 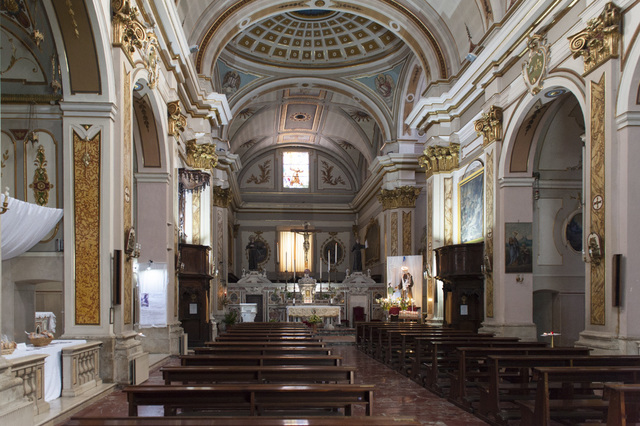 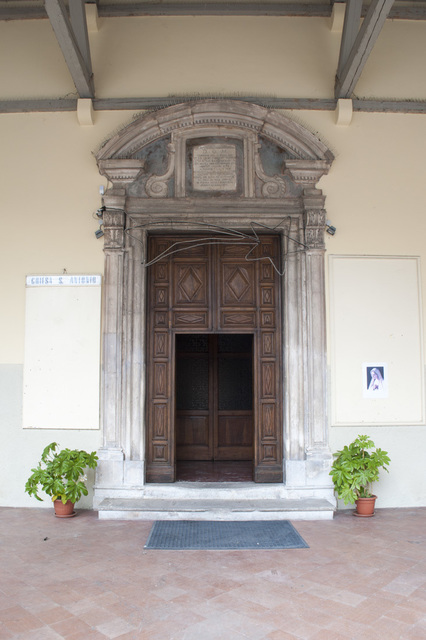 
The church, with its former title of San Nicola della Forma was first mentioned in the Land Registry of 1376, while the monastery, according to historical tradition, was built by the Sulmonesi around 1443 in gratitude to San Giovanni da Capestrano, for bringing about an end to the struggles between the Merlino and Quatrario families that had long devastated the city.


The Saint then entrusted the care of the church to the Observant Franciscans, also known as the Zoccolanti, who were replaced in 1592 by the Reformed order. Until that date, the church occupied the space that is now the choir while the convent, which had probably already been expanded and partially frescoed, would have housed fourteen friars. Needing to accommodate a greater number of friars, it was then further modified and enlarged with the addition of an infirmary, a pharmacy and an important library.


The church, in the same way, was completely transformed. The original part was demolished and in its place a new one was built of about the same size as the current church, but of a lesser height.


Between 1651 and 1681, thanks to the contributions of citizens from Sulmona and Introdacqua, the church was built, together with the dome, the choir and large windows.


The convent acquired increasing importance and became the seat of the chairs of theology, philosophy and the doctrine of Scotism.


The earthquake of 1706 however caused serious damage and the church was rebuilt in 1726 and consecrated in 1740. The convent was rebuilt four years later.


The decree of the abolition of religious orders, issued in 1809, led to the closure of the monastic structure. It was then used several times to accommodate military troops in transit and also became a gunpowder store. It was in the documents relating to this particular use that the monastery is listed for the first time with the name of San Pasquale during the period in which the church was open for worship. With the return of the Bourbons in 1815, by permission of the king, the monks who had fled the damaged convent also returned. The structure then became a hospital in 1835 for the victims of the cholera epidemic that struck Sulmona.


In 1866 Vittorio Emanuele II decreed the suppression of the monastic orders and the ability to confiscate assets. The following year, the City of Sulmona acquired the convent, which was later sold to the government and turned into a prison which was active from 1891 with the  name of San Pasquale.  The church for the local devotion to this Franciscan saint was closed in 1984 and in 2010 the ex-convent became the seat of the Sulmona branch of  the State archive of L’Aquila.


The church remained opened for worship with the brothers embellishing it between 1870 and 1878 and in 1890 they bought back part of the ancient vegetable garden, to the left of the church from the Barons Mazzara in order to build a new, larger monastery that was then inaugurated in 1906.


After World War II, thanks to the great efforts of Father Livio Addari an orphanage plus a Vocational Training Centre and a Cinema were founded. To the same Father Addari, in the period before the war, is attributed the dedication of the church to St. Anthony - which houses a relic.

The façade is the result of a reconstruction following the earthquake of 1933. It is sloping, with a curtain wall at the end. The lower section is covered by a porch, composed of five round arches resting on columns without capitals. The 18th century entrance to the church is framed by an elegant stone moulded frame and columns surmounted by corbels supporting a broken pediment. In the pediment there is a niche and in the middle there is a plaque with an inscription, commissioned by the Mazzara family - who were patrons of the church - for the reopening of the sacred building after the reconstruction that followed the earthquake of 1706. Above and in line with the door there is a lancet window with a semicircular crowning of stained glass, flanked by two statues of Franciscan saints and surmounted by a small niche containing a bust of a bishop saint. On the western side of the Church is the old convent and the other side a new construction, beyond which, at the corner of the wall of the area which borders Viale Mazzini, the chapel of Sant ' Antonio Abate was erected in the first half of the 19th century,

The church was badly damaged by the earthquake of 1706 but then rebuilt as early as 1712. Its reconstruction was aided by several families in the city. The plan is a Latin cross with a single nave covered by a barrel vault with lunettes and a cupola in the presbytery. The walls are decorated with pilasters painted with a veined, gilded marble effect and have capitals of the composite order. The frescoes and decorations are the result of renovations which took place in the 19th century. On the counter-facade, above the front door, is valuable organ built by master organ builders from the family of Camerino Fedeli in 1756. The wooden choir with a mixtilinear railing was decorated, along with the organ casing, in the second half of the 18th century by the painter Crescenzo Pizzala, with carvings, friezes and gilding. The balustrade is painted with the coat of arms of the Bourbons. Corresponding with the columns that support the choir, there are two small side chapels, whose altars were built in the mid-19th century. Along the aisle are three chapels on each side, and each altar displays a coats of arms reflecting the patronage granted to them over the years. Another two altars are placed at the head of the transept. The first chapel on the left was dedicated to the Immaculate Virgin to mark the first centenary of Lourdes. On November 11, 1684, master Giuseppe de Cicco and his sons, well-known marble workers from Pescocostanzo who had already worked in Sulmona, were tasked by members of the Mazzara family to construct the high altar. The choir with 34 stalls is separated from the sanctuary by an iconostasis made in marble. Above the iconostasis are the statues of San Pasquale Baylon and San Giovanni da Capestrano, made from wood and papier mache, commissioned by the Mazzara family. The two large wooden confessionals with their pulpits above, and the paintings by an unknown artist in the spandrels of the dome, date back to the 18th century