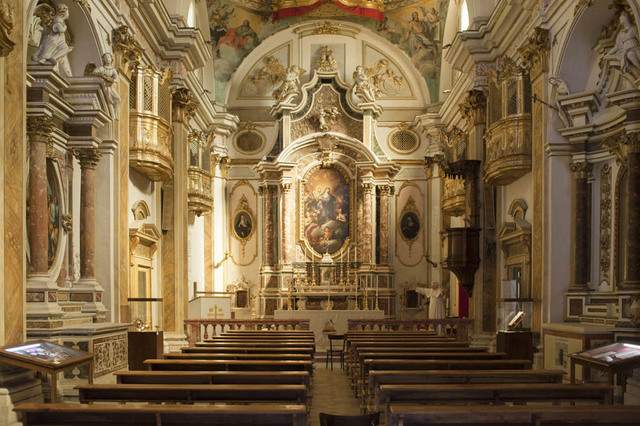 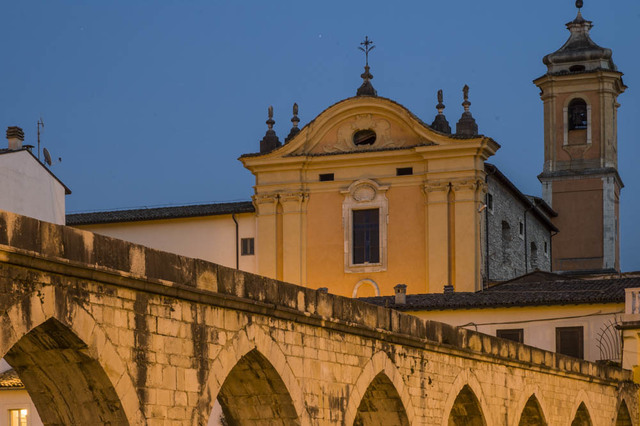 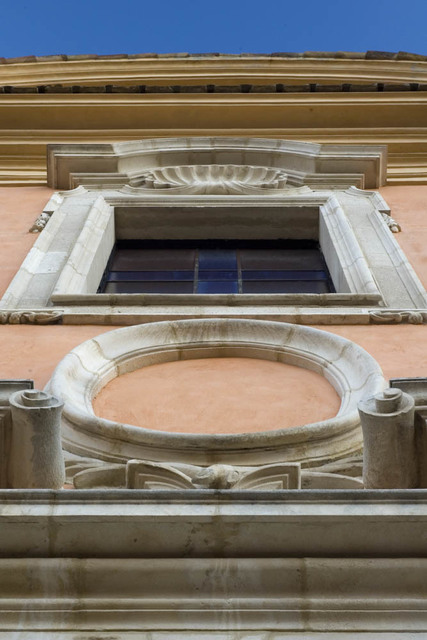 Hours: The church is open on request. The former convent is now a nursing home for the elderly. The Municipal Diocesan Museum of Santa Chiara is open daily (except Mondays) from 9:00 to 13:00 and from 15:30 to 18: 30

Admission: Free for the church. A €3.15 ticket is payable for entry to the museum in the former convent wing

The foundation of the monastery of Santa Chiara, located on the south-western edge of Piazza Garibaldi, dates back to the years between 1260 and 1269 and was commissioned by the Blessed Floresenda or Floresella, daughter of the Earl of Palena, Tommaso di Caprofico. It is  certainly one of the oldest monastic settlements of the Poor Clares in the Kingdom of Naples and, in time, it also became one of the richest and the best equipped.

It was located outside of the urban centre, in one of the expanding areas of the city, where there were no constraints to restrict its growth and it was therefore possible for the religious community to be self-sufficient with their large area of land used for vegetable gardens. The entire monastic complex covered a vast area from the ancient Piazza Maggiore as its backdrop via fields which extended out to the eastern section of the 14th century city walls.

A four-sided construction, it includes the church which is open for worship, the bell tower, the convent building itself which is arranged over two floors around a rectangular cloister, the parlour and some related dwellings that overlook the piazza.

The holy place was repeatedly rebuilt, restored and enlarged, both in order to meet its growing requirement for additional space and because of the damage caused by the terrible earthquakes that swept over the city, especially those of 1456 and 1706.

The convent building is now home on the lower level, to the Municipal Diocesan Cultural Centre of Santa Chiara, while the upper floor is used as a home for the elderly. The rooms on the ground floor inside the chapel, along with other sections including the vast dining hall, are used as the exhibition space of the Diocesan Museum of Sacred Art.  Three other rooms are reserved for the Diocesan Library.   In the reading room - set up in the former parlour - you can still admire the stone gratings, behind which the Clarisse could meet visitors. In the remaining areas there is the collection of modern and contemporary art which forms the Municipal Art Gallery, connected to the International Exhibition of Contemporary Art which is held every year in the city.

In the aftermath of the earthquake of 1706 the church was rebuilt having been seriously damaged. The task was entrusted in 1711 to the famous architect from Bergamo, Pietro Fantoni - the same architect who was responsible for the renovation of the church of SS. Annunziata - who followed the size and layout of the previous building. On the right-hand side stands the square bell tower over four levels whose top level, having collapsed in 1587, was rebuilt.

Built according to the new Baroque sensibility, which used the effects of surprise and dynamism in both urban space and architecture, the church of Santa Chiara is revealed gradually to the visitor coming up from Piazza Garibaldi. In fact, only having passed the lower part of the building at the top of the staircase, and having entered into the tiny courtyard of the church, can the facade be seen in its entirety and - on the left - the beautiful entrance gates to the monastery. The façade of the church, framed by an order of paired pilasters on a high stone base, is finished in plaster and ends at the top with a curved broken pediment. In the middle there is a baroque stucco gable with a central elliptical oculus. The Baroque door is decorated with a pediment with a curved profile, interrupted in the middle by an elliptical stone medallion. Above, in line with the portal, there is a wide rectangular window with a mixtilinear gable and shell motif.

The church is one of the finest examples of the Baroque in Abruzzo, with a profusion of stucco elegantly distributed on the walls and ceilings. The 18th century restoration merely gave a new look to the building, without changing the layout. Despite the conservative choice of the external structures, the internal space was, however, completely transformed. The presbytery was raised and an elliptical dome with a low profile was added. On the walls, two niches on each side were created, within which were inserted fine marble inlay altars of the school of Pescocostanzo. On the side walls there are six carved, gilded, wooden choirs with dense grilles. These allowed the nuns to participate in the liturgy in accordance with their vow of enclosure. The high altar dates back to 1735. Thirty years later it was enriched with a panel of the Gloria di Santa Chiara, signed by Sebastiano Conca (1679-1764), a famous painter of the Neapolitan school.

In the courtyard of the churchyard are two doors facing each other - one which enters into the monastery and the other leading to the ‘parlour’ visiting room. They are both refined and successful examples of Baroque decoration. At the entrance to the convent was the "wheel" for abandoned babies. The parlour was built in 1623 and is located in the square in front of the entrance. It consisted of a vast room which was joined, via a series of openings with grates, to the interior of the enclosure. The convent of Santa Chiara reached its peak in the 18th century, when buildings on three sides of the enclosure were completed and the interior was enriched with Baroque decorations. During the 18th century, the complex was not only restored, restructured and rebuilt after the damage of the earthquake of 1706, but was also completed with the addition of other rooms.

The complex remains, not only for the layout and for the strict methods of communication with the outside world, and despite the significant changes implemented after its suppression, a valid testimony of the cloistered life which was lived here. The ground floor of the convent housed service areas linked to the organization of the cloistered life. These were the parlour, the internal chapel, the dining hall, the kitchen, the pantry and the wine cellars whilst the upper floor housed the school, the choir, and the dormitory. The monastery closed in 1918 however there still remain in various areas, including the refectory, frescoes from the 15th and 16th centuries.

On the walls of the domus orationis, now a museum room, traces of frescoes, dating from the late 13th and early 14th centuries can still be seen. The cycle of paintings illustrates scenes from the life of Jesus, alternating with episodes from the life of St. Francis. The cycle is divided into two sections - one above the other. In the upper one we can see the episodes of the Preaching before Honorius III, the Baptism of Christ, St. Francis receiving the stigmata and Jesus in the Pharisee's house. At the bottom the Flagellation and the Crucifixion are represented. In the oratory two paintings dating from the 16th century are preserved. One is the altarpiece of the Crucifixion above the main altar in stucco and the other is the Virgin and Child between St. Francis and St. Clare in the lunette of the entrance way.