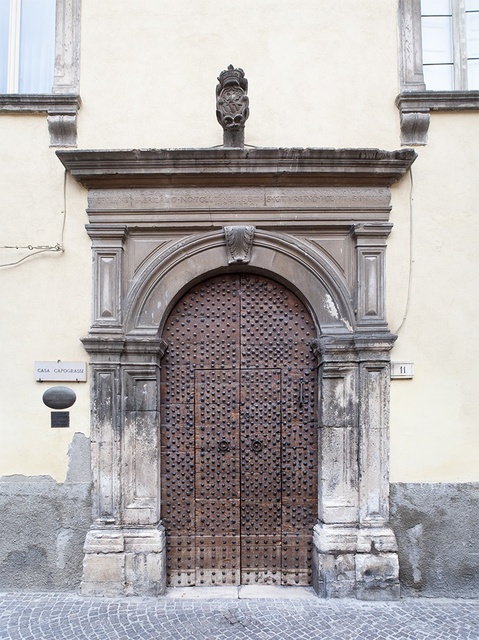 
The building belonged to the noble family of Capograssi who moved from Salerno to Sulmona in 1319 in order to follow the bishop Andrea, who acquired it in the mid-14th century.


It was renovated and expanded several times over the years, perhaps incorporating the former home of the Sulmonese Meliorati family. It was to this old family that Cosmato di Gentile belonged.  He was born in Sulmona in 1336 and elected Pope in 1404, with the name of Innocent VII. The heraldic insignia of the Meliorati family - a banded shield with a falling star accompanied by two diagonal stripes and the crossed keys of St. Peter - is carved on the lintel of the last balcony on the left.


Here there is also an inscription which refers not only to the name of the pope, but also to his nephew Lodovico Meliorati II.  According to local historians, he was responsible for commissioning the restoration of the building in 1470.


Currently the building houses the Abruzzo National Foundation of Giuseppe Capograssi - the noted philosopher and lawyer who was a distinguished representative of the noble family.

The building is the result of numerous reconstructions, starting from as early as the end of the 15th century, which have substantially modified its original appearance. The radical intervention of 1574, during which perhaps the two adjacent properties - the Meliorati and Capograssi houses were merged - was instigated by Dionisio Capograssi, as mentioned in the inscription on the portal. The most important features of the building are found on the front side, where there are large 16th century windows with sills resting on moulded ledges, and the main portal. The latter still has some stylistic features consistent with the Durazzo portals from the beginning of the 15th century, but the paginated classically moulded cornices, and the use of panels, are closer to the style of the second half of the 16th century. Another special feature is the position of the coat of arms - a banded shield with a griffin - which would usually be placed at the sides of the arch, which here instead sits above the upper frame. The lintel is carved with a Latin inscription whose translation reads: "Of all the things that give satisfaction, even pleasure, not instead of building. In fact the pleasure of building does not end with the building: it is therefore not a pleasure but a necessity. Dionisio Capograssi 1574 ". The wooden doors are decorated with a dense network of metal studs arranged in a regular pattern, which gives the portal a more medieval look.

The interior of the building has an atrium paved with river pebbles, leading us to assume that there was previously a central courtyard, perhaps destroyed by the successive reconstructions following the earthquake of 1706. The rooms of the building house, in addition to the Capograssi Foundation, a library of legal-philosophical works plus relics and documents related to Giuseppe Capograssi. One wing of the building is now a private house.