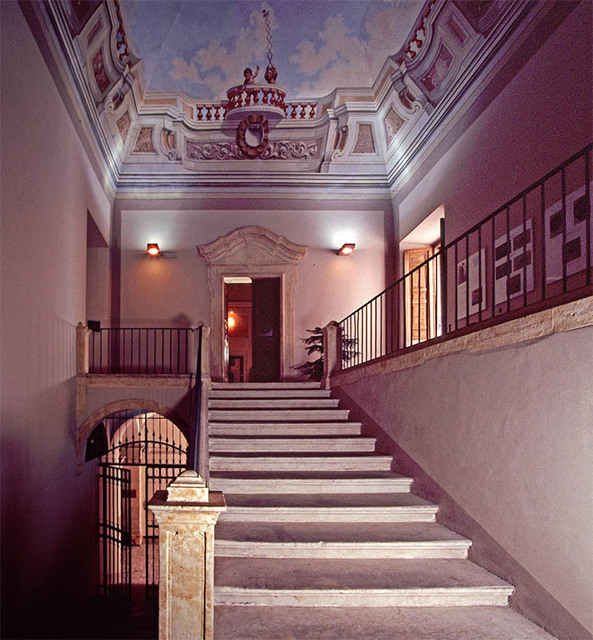 The palace that today covers a vast area between Corso Ovidio, Vico del Vecchio, Vico dell’Arco and Via Roma, is the result of successive building periods. It acts as an important cornerstone landmark of the city as it sits at the point of the high medieval city walls, the ancient Porta Salvatore, the church of San Francesco della Scarpa, the Fontana del Vecchio and the Medieval Aqueduct overlooking Piazza Garibaldi.

The current building is characterised by five units. The first of 16th and 17th century origin is on Vico del Vecchio. The second - adjacent to the first and which opens onto the same road axis - was rebuilt in the second half of the 18th century after the earthquake of 1706. The lower-part of the third was rebuilt in the last century and the fourth consists of the monumental 19th-century building which overlooks both Corso Ovidio and Via Roma.

The body of the 16th - 17th century building

This small part of the building - the original nucleus of the whole building - was built in the late 16th and the first half of the next century. The building should have been extended to Corso Ovidio, given the presence of the abruptly interrupted string course. The building can be dated by the interesting articulation of the facade which ignores the classic syntax in the search for new and more daring combinations of architectural elements, according to the mannerist style of the time. This is evident first of all in the entrance portal, which is similar to that of the Sardi and Molina buildings. It has a smooth ashlar finish reminiscent of examples from Rome such as the Palazzo Farnese by Sangallo in Rome where the architectural orders completely dominate the ashlar facing. The ashlar, also used in the windows, grows lighter in style as it rises up the building. So from the square windows on the ground floor, the first floor windows are rusticated with an ashlar lintel (a solution adopted by G. Romano in the Palazzo Stati Maccarani in Rome) to the second floor where the ashlar forms part of the inside of the opening only. Other details which are also close to the Roman style of that period include elements derived from Michelangelo such as broken pediments and kneeling ledges that support the windows, the angular Ionic order, and the use of the singular banded order of the windows on the upper level which are copied from Michelangelo’s Porta Pia in Rome.

The body of the 18th century building

Within the space of a few metres, the precious architectural details from the various centuries bear witness to the evolution of the architectural language. In the classical Renaissance Fontana del Vecchio, the linearity of the composition, the delicacy of the architectural elements and the semicircular ‘Alberti’ crowning, contrast with the vigour and drama of the new mannerist language that heralded the advent of the Baroque, which we can see in the body of the 18th century building. The enormous building, constructed in the mid 18th century, has a long facade along the Vico del Vecchio and is divided into three floors. The upper mezzanine floor was modified in the early 20th century with the construction of windows with balconies. The main entrance on the left opens into a rectangular courtyard which leads, on the right-hand side, to the double staircase up to the main floor. The architectural language is characterised by a serene classical composition enhanced by decorations and floral designs which lack the drama of the projections on the nearby mannerist prospectus. The vigour of the 16th and 17th century style gives way to a more sober facade design which is reminiscent of early 16th century and which characterises much of the architectural production of 18th century Abruzzo. One of the major elements of interest in Palazzo Corvi is the asymmetry of the 18th century façade of the Vico del Vecchio and the lack of completion of the courtyard. These suggest a design - never implemented - to create a single large building, extending out to Corso Ovidio, on the site of part of the 16th century building, and with four entrance halls including the two existing ones and another two to open up onto Via Roma and Corso Ovidio. The courtyard has a more elaborate architectural language, obtained through the use of an order of Tuscan pilasters, on the ground floor, and also of Ionic pilasters. It contrasts with the horizontal framing of the entablature and string course cornices placed so as to fill up the entire space to achieve a unity of composition which was never obtained due to the failure to complete the building. The architectural language of the courtyard has clear references to the Roman Baroque. The rounded corner solution that gives unity to the space, and the architectural order that stretches upwards by replicating the capitals above, follow the example of the Borromini courtyard complex of the Filippini in Rome, as well as the copies of the spirals of the Ionic capitals. At the same time there are also elements drawn from the Neapolitan style such as the use of arches and niches on the ground floor as well as the wide double staircase leading to the main floor.

In the 1990s, the rooms of the main floor of the building underwent a thorough restoration that allowed the recovery of much of the original 18th century decorations, consisting of stucco, gilding and tempera paintings. The entrance hall has a rectangular plan and is covered by a pavilion with a central frieze. On each wall there is a pair of oval medallions with a rectangular frame featuring stucco bas-reliefs painted with allegorical scenes and rural landscapes enriched by neoclassical architectural elements in the middle. The oval to the right of the entrance is engraved with the date 1770. This probably refers to the company who decorated the building. Through a stone door opens a smaller room with a vaulted ceiling decorated with a central frame with gold leaves. This contains the remains of paintings which, along with other fragments, are difficult to read but we would assume to have been of a mythological or allegorical theme. On the left you pass the private chapel, with a stone altar above which there is a painting of Christ carrying the cross. On the right there is a Madonna and the other side a few pictorial remains which are uninterpretable. Three framed stone doors lead to the reception hall which is called the ‘Lake Room’ because of the painting on paper, in the middle of the pavilion vault, which depicts a countryside view with a lake. The ceiling is also decorated with plant themed stucco friezes with gold floral frames. In this area there is a stone plaque with a Latin epigraph dated the first half of the 3rd century AD. (classified C.I.L. IX 3160) which was discovered in 1777 in the area between Pratola and Raiano and which, since 1785, has been kept in this residence. The plaque is an inscription of honour, originally located on the base of a statue erected in a public place to commemorate the merits of a Patronus of the city of Corfinio i.e. an influential person who defended the interests of the municipium. Finally there is the Hall of Aurora, so named for the subject of the tempera painting in the centre of the vaulted ceiling, on a background of clouds, with Aurora on a golden chariot drawn by four horses.