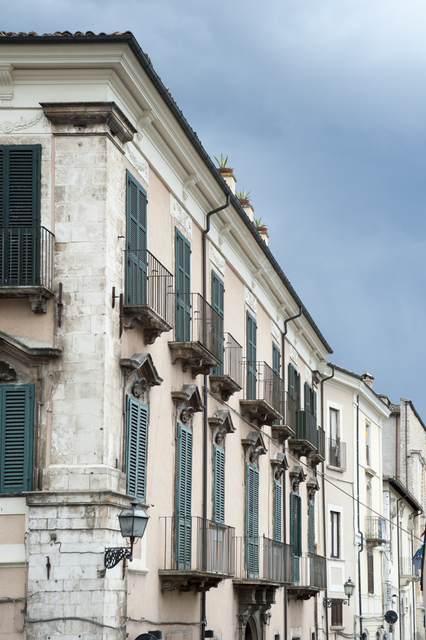 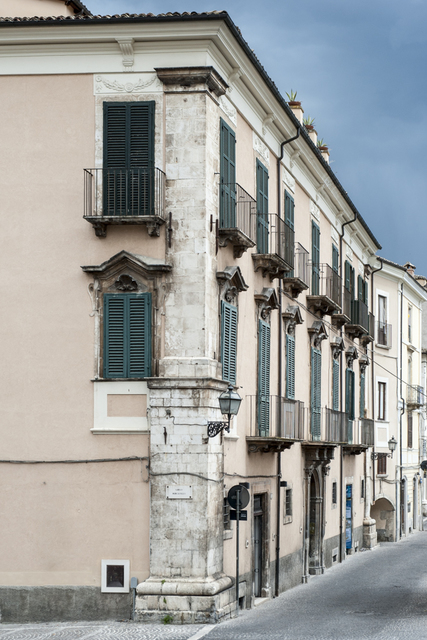 The façade, entirely plastered with the exception of strong cantonals in hewn stone, is on three levels that are characterised by different types of openings and decorations.

On the ground floor, the entrance arch is framed by Ionic pilasters embellished with panels and a sideways pattern of lobes in the late Baroque style.

Above the architectural orders and the keystone of the access door are the support brackets for the balconies above with tile windows, alternating with architraved portals, which mark the ground floor where, once, were warehouses or storage rooms, and today are shops.

The main floor above, characterized by alternating balconies and windows which are united by the elegant pattern of moulded stone and the mixtilinear gable with a shell motif. The central window above the entrance door to the building, displays a 19th century shield “troncato semipartito, nel primo all’aquila al volo spiegato; nel secondo all’angioletto seduto che suona lo zufolo; nel terzo all’albero” which refers to the surnames of the two houses: the wings of the eagle for Alicandri, and the whistle (or Ciufolo) for Ciufelli.

The top floor, most likely raised at the turn of the 19th and early 20th century, presents a succession of balconies of different widths and rectangular windows with stucco plant festoons alternating with shrubs.  A small terrace stands on the central portion of the prospectus.

This building belonged from the late 17th century and throughout much of the 18th century to the Zavatta family of Pacentro. It was rebuilt by this family in its present form as a result of damage sustained in the earthquake of 1706. It passed to the Granata family and was then purchased in 1819 by the priest Don Nicola Ciufelli who bequeathed it, along with the rest of his estate, to his niece Rosa Maria Ciufelli, who had been married since 1811 to Carlantonio Alicandri, provided that her children would take the Ciufelli surname. At this point the family took the name Alicandri-Ciufelli. An emblem of matrimonial alliance between the two houses, in stone, adorns the balcony above the entrance on the front overlooking Piazza Garibaldi. Historical documents record that the statue of the Virgin, the protagonist of the historical event of La Madonna che scappa in piazza, was kept from the late 18th century in the chapel of the building, and was transported to the nearby church of San Filippo at dawn on Easter Sunday to participate in the holy performance.