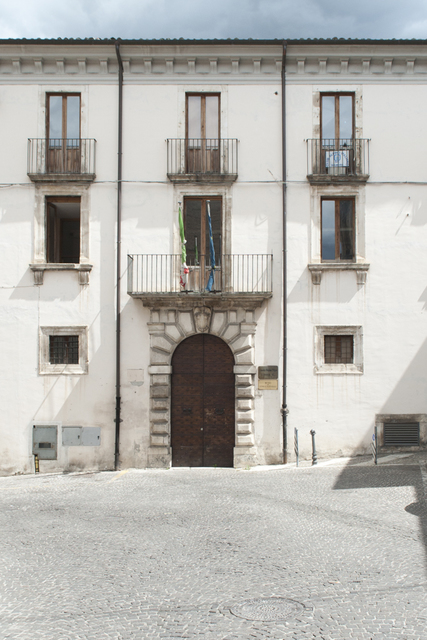 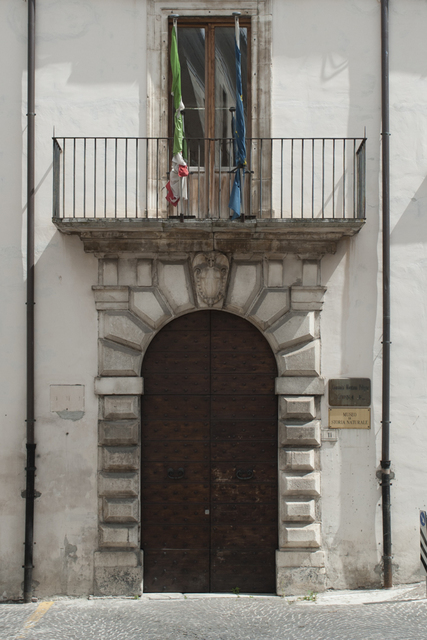 The historic home, much altered over time and greatly transformed, respectively, is structured on three floors in the main elevation and four in the south facades (Piazza Garibaldi) and east (along via Marselli), due to the difference in height of about 5 meters between share via Angeloni and that of the great basin of the square. The atrium, covered by a barrel vault with lunettes, introduces the small central court - relevant plant century and originally definitely more spacious and equipped loggia (then buffered) - which has rectangular and arched windows of a later period; It is placed inside the well with the emblem of marriage alliance between Julius Sardis and the noblewoman Maddalena Colli Aldana, whose wedding was held in the second half of the sixteenth century.

Prospectus cinqucentesco remain on off Angeloni, the windows of the ground floor tiles, the portal to smooth ashlar with brackets that support the upper balcony and heraldic oval, unusually placed in keystone, with the head of a satyr or a demon, and the windows of the main floor crowning horizontal, molded cornice and corbels kneeling supporting the sill.
Instead they belong to a later stage the openings of the second floor and the top cornice with Mesole clenching top the composition of the facade.

In cantonal corner of Via Marselli is recognizable tax arch Porta Manaresca, belonging to the ancient city walls, of which the steep road was the access ramp.
The earthquake of 1706 forced him to repair and strengthening of structures, greatly compromised: was then built on the southern front (towards the square) a buttress stone and changed the system of openings, adding to the elegant theory of Cinquecento windows balconies - asymmetrically with respect to the axis of the front - and the two pairs of arched lancet windows on the top floor, isolated episode architectural building town.

In the late nineteenth century, it was provided to then plugging the interior staircase and the porch of the courtyard and the realization of the scores decoration in the rooms of the main floor: gilded stucco, portraits of famous people of Sardis family and frescoed with grotesque pattern; the coffered wood is a more recent invoice.

Located near the ancient city gate of Manaresca, the building rises over via Marselli (commonly called Costa dei Sardi) which leads into Piazza Garibaldi - formerly known as Piazza Maggiore. The piazza was the home of the city’s fairs, markets and the most important community gathering of the citizens and this slope leads to the original heart of the town. The 16th century building was the home of the prestigious Sardi family who apparently purchased it from the Sanita family in the 17th century and subsequently expanded it. After the earthquake of 1706 the building was renovated and enlarged again with the addtion of other adjacent properties. The main entrance is Via Angeloni but the rear facade dominates almost half of the northern side of the piazza and provides an imposing architectural backdrop. Stripped of the rich library and furniture, the building was purchased in the 1980’s by the Comunità Montana Peligna who then restored it, making it their headquarters and establishing within it the Museum of Natural History. Today it shares the use of the building with other local associations.