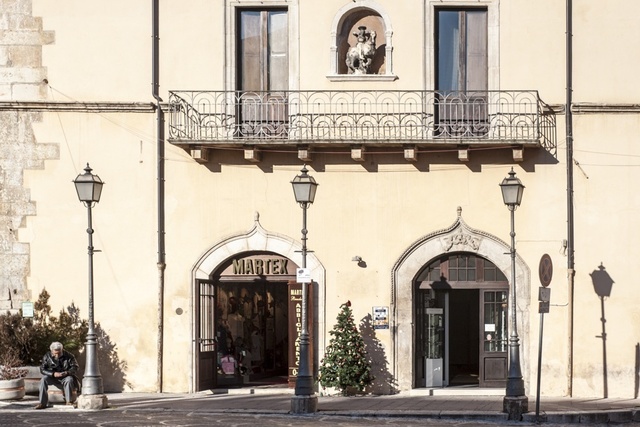 
According to the inscription on the corner cantonal, the building was erected in 1484 by the Venetian Giovanni delle Palle, citizen of Sulmona and merchant. Probably the inscription relates to a reconstruction to repair the damage caused by the earthquake of 1456, which modified the upper floor.


Presumably he was one Master Simone, an architect from Venice, who had come to Sulmona during that period to deal with the reconstruction of the building on behalf of his fellow countryman.


Subsequently, further changes were made, especially after the 1706 earthquake when the owners were forced to wall-in all openings, including the porch which is still evident on the side facing Corso Ovidio.


The building was formerly also known by the name of Palazzo San Giorgio, due to the presence on the facade of a small statue of the saint on horseback slaying the dragon.

Originally, the main entrance which is currently on Corso Ovidio, was placed on the facade overlooking Piazza XX Settembre and was probably identifiable with the right arch, framed with diamond-shaped studs, which shows two angels in flight holding up a mermaid carved into the key stone - a possible reference to cargo carried by the client. On this portal stood the statue of St George on horseback. After the earthquake of 1706, it was relocated to the centre of the new facade, in the niche located between the two balconies on the first floor, where it is still visible. The sculpture, until the early 20th century, was identified by the people of Sulmona as Ovid on horseback, as his family belonged to the equestrian order. The twin door, also semi-circular with a keel profile, is probably the result of a renovation. The portal that overlooks Corso Ovidio is instead 17th century, flanked by Ionic columns on a base, and decorated with rustications that climb up the columns. The archway entrance has at its centre a shield, with the insignia of the families Trasmondi-Scala, topped by the elegant balustrade windowsill of the first floor. A portico consisting of three arches opened onto this side of the building which is still recognizable despite its infill. It consisted of two semicircular arches and one pointed arch, near the corner cantonal, giving access directly to the upper floor. On support pillars were placed statues on ledges, one of which represented a mermaid again, flanked by two dolphins. Until a few years ago on the corner cantonal there was a statue of St. John the Baptist, the patron namesake of the owner, now housed in the Museum of the Annunziata. The only structures of the upper floor, dating back to the late 15th century renovations, are the elegant mullioned windows, softened with slender columns and the central window of the balcony above the Baroque portal. The section on the right of the aforementioned portal seems instead to be the result of later interventions. The windows of the main floor are, in all probability, contemporary with the nearby portal while the openings with fanlights on the ground floor, similar to those on the southern facade, date back to the 19th century.