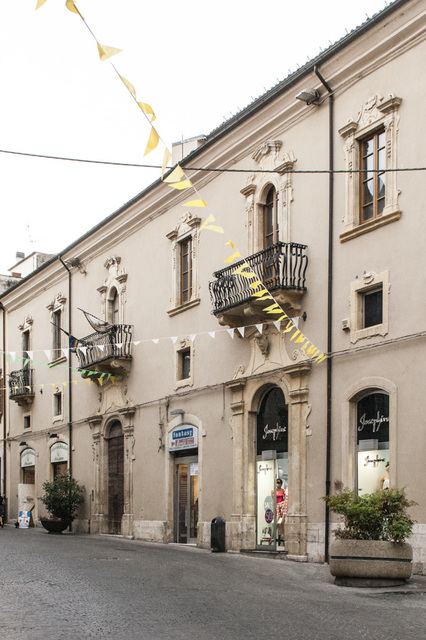 The building is among the most significant of the Abruzzese Baroque and shows stylistic influences from Rome reinterpreted by local workers.   It also seems plausible to assume in this case that the stonemasons came from the nearby mountain village of Pescocostanzo.

The architectural and historical value of the building is expressed primarily in the facade along Corso Ovidio. Although it was altered over the centuries with the addition of new elements in the early 18th century, it reveals the presence of a design that is characterised by the alternation of the windows of various shapes and balconies that give rhythm to the length of the facade, underlining at the same time the presence of the main access doors.

The most notable elements of architecture and decoration are the two door and window systems.   The decorative tone and chiaroscuro is lessened in the middle sections with small doors, fanlights and windows and then accentuated at either side with the addition of balconies.

All the architectural elements contribute to the rhythm of the prospectus with different shapes and increasingly complex decorative solutions. These start from the square windows with rectangular fanlights, which change to windows with flat-ended jambs and a central pediment with a shell motif, then to french windows with smaller balconies and bigger balconies with a curved profile, until finally arriving at the two main access doors to the building which are framed by pilasters and surmounted by scrolls either side of the Baroque pediment which has a slightly inflected crown.

It is appropriate to point out once again that the overall design of the facade, which is visible today, is the result of different interventions over the centuries.   Among the architectural elements, almost all date from the end of the 17th century and the first decades of the next century.  Some of them are however later such as the smaller 19th and 20th century doors and the shell cornicing which runs along the top of the prospectus.

The building was purchased after 1706 by the wealthy Grilli family from Pescocostanzo. They owned it for generations before it was then passed to the de Capite family in 1887, when part of the building was sold to Clementina Grilli and her husband Filipo de Capite. The stone coats of arms of the two houses were affixed to the left-hand side of the main portal after the restoration of the building in 2006. They are replicas of the twin shields carved on the archivolt of the Grilli building in Pescocostanzo, which passed by marriage to the de Capite family in the mid 18th century. In Sulmona, however, the reverse arrangement of the de Capite insignia, with respect to that in Pescocostanzo, gives the historical ownership of this building to this family and not to the Grilli family. On the right-hand door in the middle is the Corvi emblem - from the 19th century although of a Baroque style - which could refer to the marriage of Vincenzo Grilli to Elisabetta Corvi in ​​the mid 19th century. It was however placed here sometime after 1907, as documented by a photograph of the era in which the emblem does not appear.