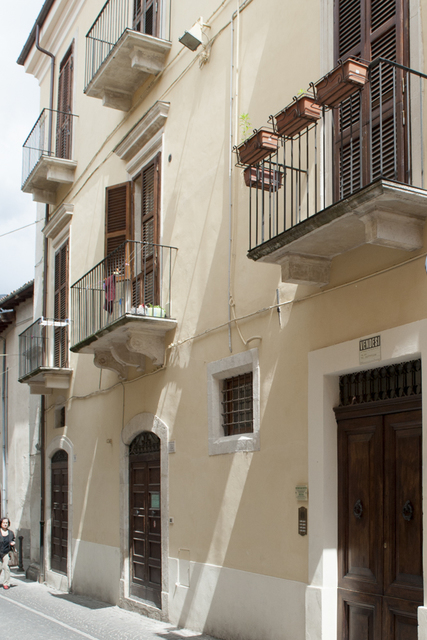 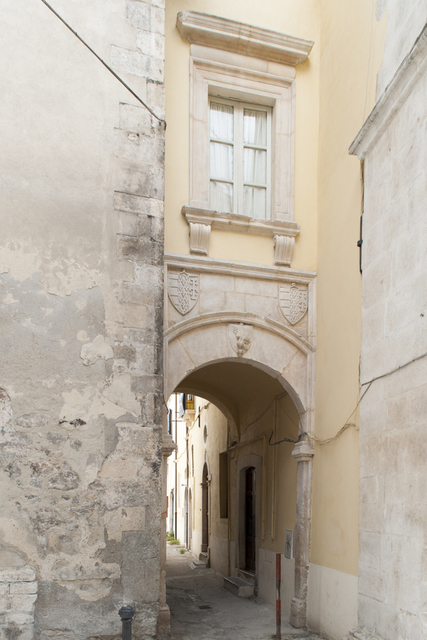 Situated in the district of Porta Manaresca, the building dates back to the 16th century, but was seriously compromised in the earthquake of 1706. As we can see by the rooms on the ground floor of Via Roma, in the rooms beyond the Durazzesco arch adjacent to the ancient church of St. Thomas and in the underground rooms located along Vico dell’Arco, the building would have been quite sizeable.

In the late 19th century, a period in which the building’s height was increased by the mezzanine attic which was intended for housing, it still retained the ancient staircase that led into a porch with a wooden colonnade. The building suffered further damage in the earthquake of 1933, when the western front of the building and part of the Vico dell’Arco fell, and were then rebuilt after the war.

From the original structure, only the Durazzesco doorway remains  - reduced to a simple underpass - with the emblem of the family. Traces of another Colombini emblem are located on the stone pillar placed at the beginning of the staircase of the adjacent building at number 26, which was the newest wing of the historic home, irreparably damaged by the earthquake. It is specifically an emblem of a marriage covenant: a convoluted oval with the insignia of De Capite family, another illustrious Sulmonese family.

In the recent restoration work along the eastern side of the building, behind the 19th century plaster work, the remains of another more simple Durazzesco arch was discovered.

The Durazzesco access on Via Roma has a segmented arch on slim piers and a keystone which features the family’s coat of arms - a turned dove with an olive branch in its beak - on an old Gothic shield with nails. The large expanse of horizontally crowned stone is adorned with two shields, similar in type, with the insignia of Ladislao Durazzo of Anjou from the beginning of the 15th century, whose presence confirms the familial bond of the Colombini with the royal crown. Above the arch there is a large window with a Renaissance frame. To the left of the portal you can still see the remains of the facade of the small medieval church of St. Thomas the Apostle. There is a simple, small, stone portal with a lintel, flanked by thin columns with Corinthian capitals supporting the frame with a pointed arch above the lunette.