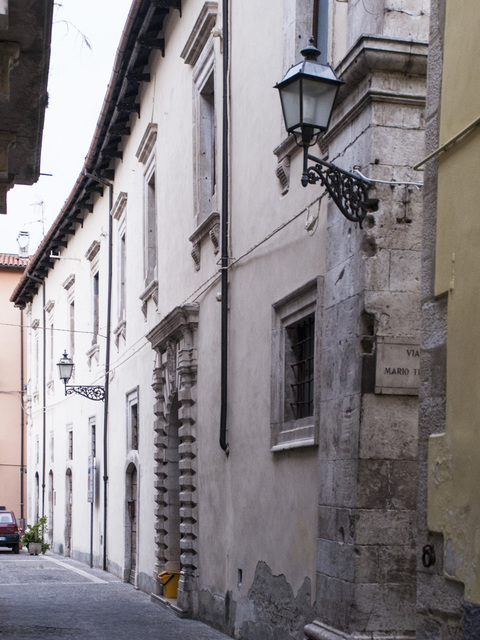 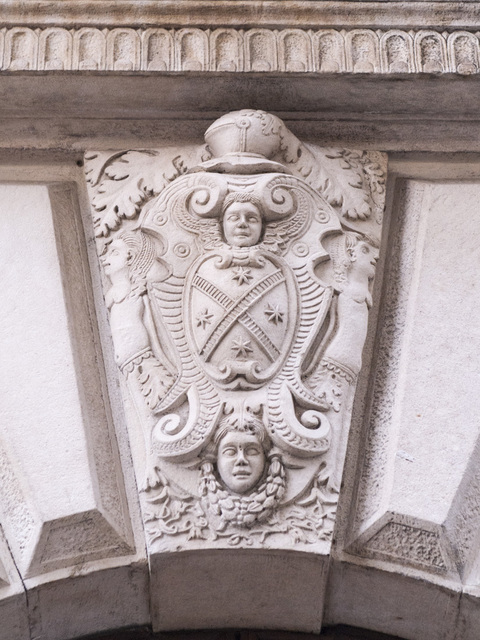 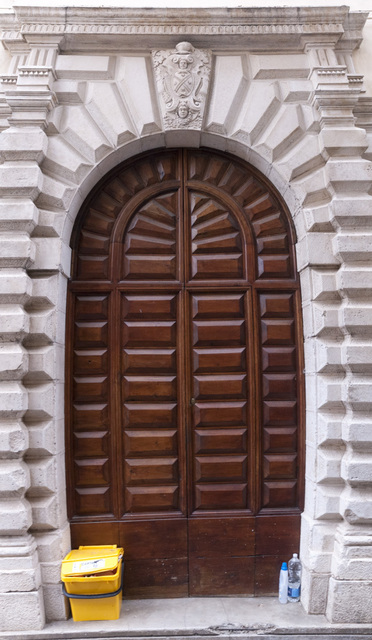 The building has an imposing two-storey facade on Via Quatrario. On the ground floor, there are  large tile windows framed in moulded stone with the door off-centre compared to the median axis of the facade.   Four of the six windows now act as fanlights to the stone doorways which were opened later to allow easier use of the premises on the ground floor, by making them accessible from the outside.

The impressive round rusticated portal that dominates the central archway repeats the rustications even on the pilasters, following the example of other portals in Sulmona from the 16th century such as Palazzo Sardi on Via Angeloni and Palazzo Corvi in Vico del Vecchio.

In the keystone of the arch we can see the coat of arms of the de Scalis family.  It is a "speaking" coat of arms, which alludes to the name of the family: two crossed ladders accompanied by four stars within an oval shield, topped by a helmet with a closed visor, convoluted and surrounded by scrolls with an angel’s head above and below a cherub with a garland and flanked by two female figures.

On the main floor at intervals is a series of eight rectangular windows with moulded frames and a straight crown with kneeling ledges decorated on the front with a relief pattern that resembles the veins of a leaf.

In the ceiling of the building are the monochrome baroque emblems of the Pietropaoli family and a replica of that of the de Scalis family. There is also another 16th century shield of that family with the emblem of Rainaldi - probably for the union between the two families - on the elegant well of the internal courtyard.

Known as Palazzo Molina and near the homonymous postern, it actually belonged initially to the House of Scalis - documented in the city as early as the 14th century and registered among the noble families of Sulmona in 1572. In the first half of the 17th century it passed to the barons of Pietropaoli thanks to the wedding between Giulio de Scalis and Laura Pietropaoli, daughter of Muzio. The latter family, originally from Castelvecchio Subequo, from the 16th century, boasted the baronies of various centres including Molina Aterno in Abruzzo, its permanent home, from which the name of the building derived. Since the end of the 16th century, members of the family including Muzio, were present in Sulmona.