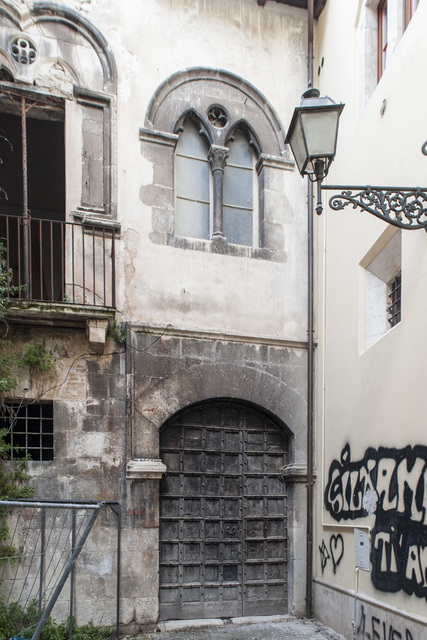 The building, whose original structure is not easy to understand, seems to consists of three rectangular sections, perpendicular to each other, and divided into either two or three levels. It has two entrances: the main one at the end of Vico Sanita - which leads off Corso Ovidio - and the other on Via Solimo.

It was originally a truly magnificent and sumptuous residence, as is reflected by the size of the floor plan and the elegance of the architectural details. The only traces of the original structure  can be found on the west side and are limited to a portion only a few metres long.  These are the hall and the two mullioned trefoil windows above - one of which leads to a balcony. The Durazzesco door with a low arch, in the opinion of some scholars, was the work of Pietro da Como who, in 1449, was working for the Tabassi family in Via E. Ciofano.  Later theories suggest that this simplified model perhaps dates back to the restoration that followed the earthquake of 1456. The arch, similar to other examples of the period, has a rectangular moulded frame which, together with the piers, is smooth and without decoration.

Of note are the two mullioned trefoil windows, each with an oculus above the central column. The right-hand one is inserted into a single arched frame, corresponding to a type widespread in the L'Aquila region of Abruzzo.  The other one is partially filled in and also cut off by other buildings. Its piers are framed by a relief moulding that ends in a double archway closely resembling Romanesque derived patterns of Catalan influence.

The main door gives access to the internal rectangular courtyard which is characterized by a portico with four arches.   Here there are three small Gothic portals, one of which connects with Via Solimo and which bears the emblem of the house. The latter has a round arch framed by pillars and decorated with elegant panels which connects to the curved gables at the top. Above the arch stands a convoluted coat of arms from the 17th century and surmounted by a patrician crown with two deer which are of the symbol of the family. On the side are two Gothic shields from the beginning of the 14th century.  The one on the left, featuring lilies, belongs to the House of Anjou and probably comes from the destroyed church of St. Augustine, whose portal was remounted onto the facade of San Filipo and where there are also other emblems of the House of Sanita.  The other shield, on the right, is the personal emblem of Robert of Anjou.

In a lunette from the internal staircase leading up to the apartments was a precious fresco (recently removed for conservation reasons and exhibited in a room of the Civic Museums of the Annunziata Complex) depicting the Madonna and Child with Saints.  Another image of the Virgin and Child with devotees, painted on the second flight of stairs, is attributed to the Abruzzese painter Andrea Delitio and was certainly created around 1450, when the artist was commissioned to paint the church of San Francesco della Scarpa in Sulmona.

The building was the historical residence of the noble Sanita family who were natives of Todi and who moved to Sulmona in the 13th century. It is currently partly obscured by buildings erected at a later date on the previous medieval piazza, which disappeared in the reconstructions following the many earthquakes. According to local historians the mansion hosted the kings of Aragon, who were connected to the family, during their frequent stays in Sulmona. It also seems that in the 17th century, at the time of the Masaniello revolt, the building was burned down. The interior has been greatly transformed and reduced by successive overlapping constructions. Today only a small part of the original western facade remains with an entrance door and two mullioned windows. The northern facade has a secondary entrance on Via Solimo and the eastern side on Piazza Santa Monica is partially covered by the boundary wall of an inner courtyard and is in an advanced state of decay.