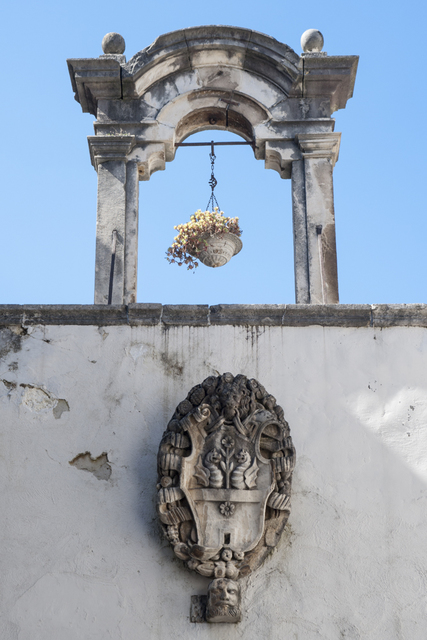 Admission: Free into the inner courtyard

Built in the 15th century, this is one of the most significant examples in Sulmona of an aristocratic residence.  There is an inscription on the side of the main entrance, together with the name of the craftsman, which also indicates the date of the door’s construction: Master Pietro da Como in 1449 .
Believed to have always been owned by the Tabassi barons, as shown by the presence of their insignia, it was recently the subject of a thorough archival study that shed light on its original ownership by the noble De Capite family. The Tabassi, in fact, took over the building between 1670 and 1672 from Baron Giuseppe De Capite, who was forced to sell due to financial difficulties.
Earthquakes - in particular that of 1706 - and the bombing of the last world war greatly damaged the structure, which subsequently required partial reconstruction.

The front of the building is on two levels and retains the original, elegant Durazzesco portal. This was an architectural element which was widely used in the Kingdom of Naples in the 15th century under the Durazzo dynasty and is characterised by a depressed arch in a rectangular frame that folds back. On the corners there are two shields with the Tabassi family crest. These latter shields, as can be seen from careful observation however, were added later to replace the previous ones which had been chiselled off and whose traces are still visible under the replacements. On the right of the portal, there is an inscription bearing the date of construction and the name of the craftsman: MASTRO PETRI DA COMO FECE QUESTA PORTA A.D. MCCCCXLVIIII (Master Peter from Como made this door in 1449) The name of a stonemason from Como can be explained by the presence in Sulmona and in the wider territory, in the second half of the 15th century, by a large number of workers from Lombardy who were specialists in stone work. They were probably attracted to Sulmona by the rich clients and the reconstruction requirements in the aftermath of the earthquake that shook the entire area in 1456. The elaborate Gothic mullioned window, the only survivor on the top floor along with the richly carved pier with a second opening, has been attributed to a different stonecutter for the obvious stylistic differences with the portal. With references to the style of the 14th century, and without perfectly harmonious architectural proportions, the window is finely carved with ornaments and decorations. On the doorposts flanked by columns sits a large lancet that repeats the decorative spiral plant motif. The central pillar supports two pointed trefoil arches and, in the top section there is a central oculus with small, side arches. The balconies on either side of the mullioned window on the front, and the balcony on the side of the building, are attributed to the 18th century. A Roman era bas-relief is mounted into the wall on the corner between Via E. Ciofano and Via Corfinio. It is a funeral tablet in memory of the freed man T. Annavus Primus and shows a scene of bear hunting.

From the portal, through the wide hallway with a flattened barrel vault, one enters the courtyard which is overlooked by a porch on two sides, and has been mostly altered from the original structure. On the right, a doorway with a pointed-arch leads to the steps up to the most modern part of the building. On the left another rounded doorway leads into a utility room. Opposite the entrance a gallery links the two wings of the building, supported by three round arches. On the wall of the closed up arch on the left are six stone funerary inscriptions from the Roman era. The right-hand arch leads into a walled garden, while the central, smaller arch contains the well on which is carved the Tabassi emblem of an oval shield with characteristic dragons. At the centre of the gallery is an original structure, which was used to draw water from the well right up to the top floor.