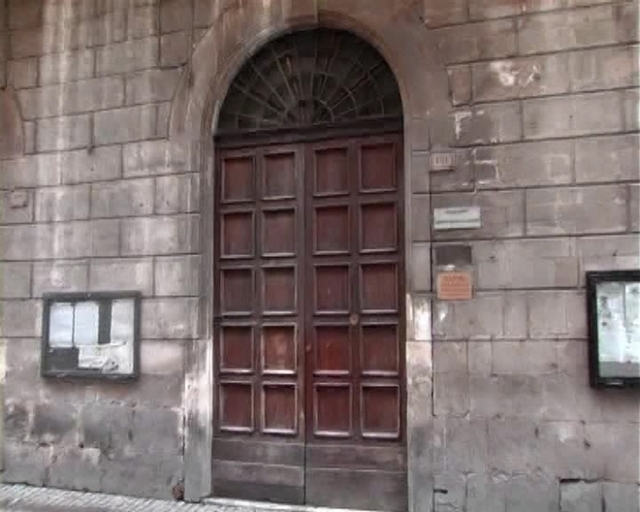 The layout of the original building and some other details are known thanks to the description by Augusto Campana  which was based on a drawing by Peter Piccirilli.

The main entrance was located near the church of San Francesco della Scarpa, on the current Via Mazara, while the side elevation looked out over Corso Ovidio.  Here, there was a porch on the ground floor with two pointed arches separated by a pillar. In line with the latter, stood the stone statue of Ovid on a ledge. Above was a large coat of arms of the city of Sulmona, with the initials SMPE on a Samnite shield crowned with foliage.

On the top level were two elegant mullioned windows with Renaissance architraves, almost certainly created - judging by the differences in style - during a slightly later period. The scholar Ignazio Di Pietro, in the "Historical memories of the city of Sulmona" (Naples, 1804), shows the inscription on the portal which, translated, reads: "By the will of the divine Aragonese sovereign King Ferdinand of Sicily, and of Giovanna his beautiful wife, Sulmona built as the seat of the Captain and of the Nobles a palace, more austere than sumptuous, in the year of Christ's birth  1490".

For the new Praetorian Palace a neo-Renaissance language was adopted instead. The three-level building is faced with smooth ashlar stone.  On the ground floor it has six portals. The two central doors are semicicular and the the side doors are architraved.  On the main floor there is a row of tall windows of smooth ashlar stone with overhanging balconies.  On the second floor, the language is even more simple and devoid of rustication, there is a succession of straight crowned windows with small, Roman balconies. The facade is finished with an elaborate stucco cornice with ledges.

The construction of the first Praetorian Palace, completed in 1490, is attributed to the then Captain of the city, Polidoro Tiberti Cesena. The building was part of the heart of the historic district of Porta Salvatoris shares the same name as the old gate to the south of the ancient city. Together with the Fontana del Vecchio commissioned by Tiberti in 1474, the Medieval Aqueduct and the apse of the church complex of San Francesco della Scarpa, it forms one of the most beautiful corners of the city. It was used as the seat of the Governor and Magistrate who, due to a lack of suitable premises, had been holding meetings either at the University of Sulmona or in a number of large churches. It seems that Queen Giovanna I of Aragon, during the feudal era of Sulmona, aware that the city was working towards the construction of a new court building, suggested that the city should limit the expense. She considered it more useful to use the economic resources of the city coffers to promote the growing wool industry. Perhaps this is why the original building, of which however nothing now remains, was constructed with such an austere desgin. In the rush to modernisation and renewal that characterised the second half of the 19th century, on June 18, 1863, the city administrators decided that the building, having been badly damaged by the earthquake, was in a dangerous state of disrepair. They began its demolition in order to build a new and more "useful" building on the same site, which was completed in 1914. The only thing that was saved was the statue of the poet Ovid, which had been placed over the porch of the old building, and is now located in the lobby of the Palazzo of SS. Annunziata. The ancient building is however preserved in memory through the writings of the figurative and descriptive local historian Ignazio Di Pietro and the art critic and scholar Peter Piccirilli. The new building eventually housed various offices and, finally, it became the home of the Community Centre for Seniors. It is currently closed due to damage from the earthquake of 2009.