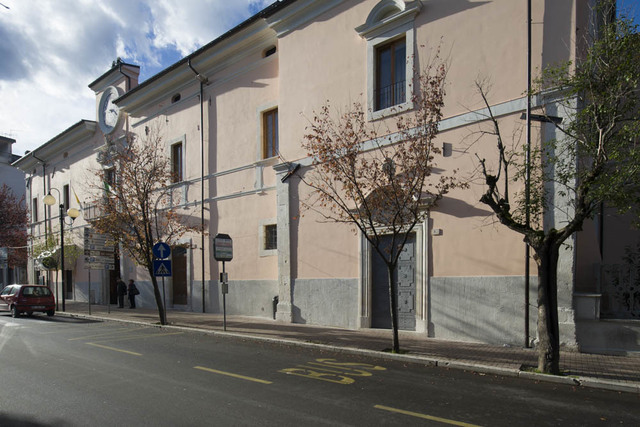 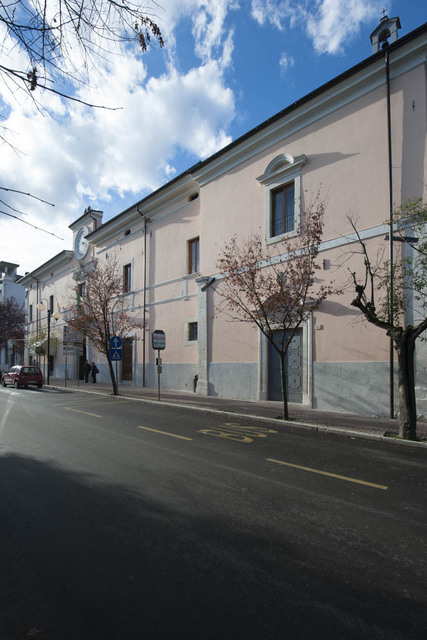 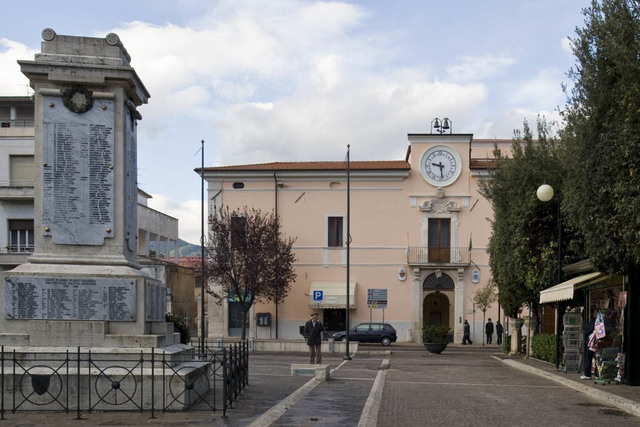 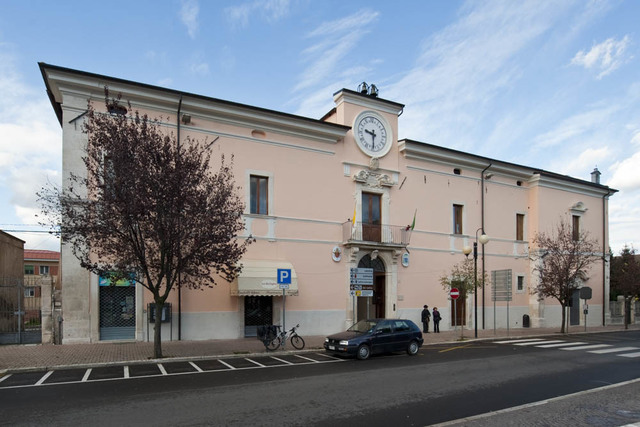 There are no traces of the original building in the current structure which consists of a floor plan organised around a central courtyard and a small single-nave church, on the right-hand side of the building.

The facade consists of two overlapping layers, separated by a high-end moulding, and concludes with an attic with elliptical openings. The middle section is accentuated by the vertical door-balcony-clock system. The first, with a round arch and coat of arms, is defined by two simple piers ending in the curved supports of the overhanging balcony window.  The elaborate stone scroll bears an inscription referring to the erection of the building in the year 1709 by Bishop Bonaventure Martinelli and thanks the generosity of Pope Clement XI. Above it the composition is completed with the modern clock and the small bell-tower.

Either side of the central front section, on the ground floor, there are simple rectangular entrances pertaining to business premises.  On the main floor above, the pairs of rectangular windows are highlighted by ledges, panels and thin stucco swirls. Before the restoration of 1972,  the courtyard featured a decorated, circular, stone fountain.

Adjacent to the right side of the building - and slightly projecting in relation to it - is the small church dedicated to the SS. Concezione. Within the simple plastered facade stands the door with architrave - topped by a panel and a gable of mixtilinear profile - containing the words: SEMINARII SACELLUM and crowned by a coat of arms with a similar design.
The palace houses the offices of the Curia, while the large area behind is occupied by the former Seminary and a rest home for the elderly.

The bishop's palace was built after the almost total destruction of the previous building from the Middle Ages, located to the side of the Cathedral of San Panfilo. Its reconstruction after the earthquake of 1706 was part of a broader reconstruction programme commissioned by Bishop Bonaventure Martinelli, who planned to build a single, large episcopal complex including the diocesan seminary, the bishop's residence and a new cathedral from scratch. By virtue of a large loan granted by Pope Clement XI, the project was to be of impressive proportions. The drawings of the Albani collection, kept in the Royal Library of Windsor, refer to the group of associates of architect Carlo Fontana from Rome. Unfortunately, for various reasons, especially the reluctance amongst local people to accept the relocation of the cathedral itself from the ancient site, the project was only partially completed in 1715, with the construction of the building, the workshop and the small church dedicated to SS. Concezione. Due to the different construction phases and various setbacks, including those resulting first from the billeting of French troops in 1799 and then the earthquakes of 1915 and 1933 the complex was only finished in 1937. The final restructuring programme was implemented by Bishop Luciano Marcante with a subsequent restoration initiated by the Superintendency BAAAS in 1973.